BBC Host Calmly Mocks A Mid-Tantrum Alex Jones: ‘You Are The Worst Person I Have Ever Interviewed’
video

BBC Host Calmly Mocks A Mid-Tantrum Alex Jones: ‘You Are The Worst Person I Have Ever Interviewed’ 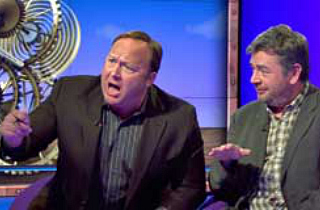 “You are the worst person I have ever interviewed,” was how BBC host Andrew Neil calmly and swiftly ended an interview with ranting-and-raving conspiracy theorist/radio host Alex Jones this past Sunday.

Jones was one of two panelists present on Sunday Politics during a discussion on the ongoing Bilderberg Group, an annual closed-door meeting of wealthy bankers, business magnates and political leaders that has become a favorite target of Jones and his InfoWars audience.

Throughout the nine-minute-long conversation, Jones repeatedly talked over his host Neil and co-panelist David Aaronovitch, asserting that the Bilderberg Group is akin to a “Nazi plan.”

When Neil and Aaronovitch posed the question of how, exactly, Jones made it into the United Kingdom and onto a BBC talk show despite both elements being allegedly “controlled” by the Bilderbergs as part of a “police state,” Jones exploded: “They actually turned back some of my reporters! But they didn’t turn me back. And I was told this because they don’t want to make a mistake.”

He also suggested that he has not been shut down by these shadowy forces because of his massive media empire. “Ladies and gentlemen, if they kill me they turn me into a martyr,” he said directly to the BBC audience. “It puts a big exclamation point on the end of everything I’ve said.”

Towards the end of the conversation, after being repeatedly told to “shut up” and let his colleague have a say, Jones simply hijacked the mic, yelling over Aaronovitch’s final thoughts on the popularity of conspiracy theories:

“Hey, listen! I’m here to warn people. You keep telling me to shut up. This isn’t a game, okay? Our government, in the U.S., is building FEMA camps. We have an NDAA where they disappear people now. You have this arrest for public safety, life in prison! It’s basically ‘Off with their heads!’ Disappear them.”

“You are the worst person I have interviewed,” Neil replied with a chuckle before ending the interview by turning to camera and reading a tease. All the while, Jones continued to yell.

And then as Neil said to camera, “We have an idiot on the program today” and mimicked a hand gesture indicating mental instability, Jones barked once more: “No, you guys are crazy!”

Watch the entire ordeal below, via BBC: