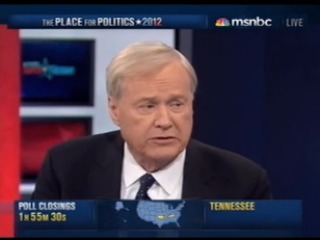 I think the call from the President to Sandra Fluke will be remembered perhaps not as dramatically as the call from President Kennedy, then-Senator Kennedy, to Mrs. King, to Coretta King after her husband was hauled off into the backwoods of Georgia in shackles.

Matthews was attempting to draw a parallel between two lawmakers who, as he sees it, had the right intuition and instinct when it came to dealing with a fraught, headline-making issue.

But, you know, “not as dramatically” indeed. While Dr. King and his wife put their lives in peril in order to fight for civil rights, Sandra Fluke isn’t quite dealing with a comparable level of violent persecution. This isn’t about playing a “the Olympics of suffering,” as these comparisons are often (and often derisively) described — especially since Fluke has very clearly faced an ugly and deplorable level sexism and misogyny for her comments — but about keeping things in perspective and not twisting historical narratives to suit an agenda.

While Fluke is putting herself out there in order to promote and fight for a cause she holds dear, a cause many see as an issue concerning equality (especially given so much of the anti-woman recent rhetoric surrounding it), there is just no way to compare that to the often bloody fight for civil rights, a fight that saw Dr. King physically attacked, a fight that ultimately saw Mrs. King becoming a widow.

Not to mention — in the spirit of maintaining perspective — that “intuitively doing the right thing” can also very conveniently serve a political purpose where a particular voting demo is concerned during an election year. Better, then, to avoid comparing struggles (like the contraception debate, like the Occupy movement) to the civil rights movement and allow them to all exist and unfold on their own merits.

Check out Matthews’ comment for yourselves, via MSNBC, and let me know how you viewed it. Am I way off here? Is it appropriate to compare these two situations?

Take our poll below: