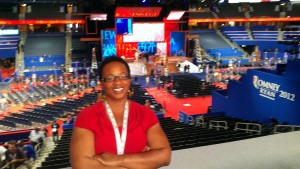 On Thursday, Patricia Carroll, the CNN camerawoman who had peanuts thrown at her and was called an “animal” at the Republican National Convention, commented on the incident for the first time. She wasn’t surprised by what happened.

“I hate that it happened, but I’m not surprised at all,” Carroll, 34, told Journal-isms. She later added, “This is Florida, and I’m from the Deep South…You come to places like this, you can count the black people on your hand. They see us doing things they don’t think I should do.”

Carroll was the camera operator who was mocked by two RNC attendees who threw nuts at her while saying, “This is how we feed the animals.” RNC security ejected them from the convention, with representatives condemning the incident. CNN later confirmed the occurrence in their own statement.

Of the convention, she noted there “are not that many black women there.” But, Carroll said, she doesn’t want the incident to be used for anyone’s political advantage — because “racism is a global issue.” It “could happen to me at the Democratic convention or standing on the street corner,” she said.

She said she wanted to thank CNN, which “has been behind me 100 percent.” Although she was stationed on the floor next to Fox News, the perpetrators “didn’t know what I was doing. I happened to be standing there,” near one of the delegations.

“I can’t change these people’s hearts and minds,” Carroll added. “No, it doesn’t feel good. But I know who I am. I’m a proud black woman. A lot of black people are upset. This should be a wake-up call to black people. . . . People were living in euphoria for a while. People think we’re gone further than we have.”

Carroll also noted that, despite receiving many requests, she has no interest in speaking to any other media outlets about the incident.