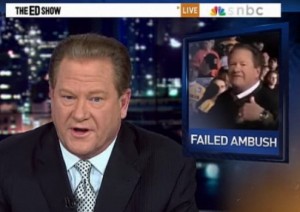 On Wednesday night’s The Ed Show, host Ed Schultz came out swinging against conservative moviemaker Christian Hartsock‘s “failed ambush” of Schultz on the issue of Ohio Senate Bill 5, which drastically weakens public employee unions. According to Schultz, the bill doesn’t allow firefighters to collectively bargain over safety issues, and when Hartsock confronted him after a show in Ohio, Schultz didn’t have chapter-and-verse handy. He remedied that on his show last night.

In a nutshell, Hartsock and the bill’s author, State Senator Shannon Jones, point to a provision that specifically mentions safety equipment as being subject to collective bargaining:

(F) Notwithstanding division (C) of this section, equipment issues directly related to personal safety are subject to collective bargaining.

That provision is an exception to the portion of the bill that gives the employer sole discretion over the following areas: (emphasis mine)

All of these areas are ones that could reasonable affect the safety of firefighters, and although some of those are subject to that exception, the language of that exception, as Schultz’s guest later explains, is subjective and narrow.

Schultz points to a section of the bill, which is scheduled for a voter referendum as “Issue 2” in November, that settles disputes over all collective bargaining issues, including safety, by a vote of the “legislative body.”

According to Schultz, this means that if “the lawmakers” decide they don’t like something, they get their way. It’s actually much worse than that, since the makeup of the legislature can change over time. SB 5 defines “legislative body” as the board of whatever department or institution is in question, the “management” side of the labor/management equation:

The bill describes a labyrinthine dispute resolution process, controlled by the State Employment Relations Board, that involves appointing a mediator, a fact-finder, serving all kinds of notices, but the really important part is where it all ends up. If there’s still a dispute after all of that rigmarole, both sides present their “last best offer,” and here’s what happens:

That’s kind of like having your mom grade your homework. If a public employer knows that this is where disputes end up, how good do you think their “last best offer” is going to be?

Schultz also interviewed firefighter’s union leader Jack Reall, who appears in Hartsock’s video, and Reall pointed out another error in the BreitbartTV clip. Reall criticizes Hartsock for selectively editing a clip in which Reall talks to firefighters, telling them “The lieutenant sitting next to you, going into the fire with you, has no right to bargain for his safety, his staffing, his safety equipment, and that is bullshit.”

Hartsock rebuts Reall’s assertion with that same “equipment issues directly related to personal safety” clause, but as Reall points out, the bill specifically excludes firefighters above the rank of lieutenant from collective bargaining:

(C) In addition, in determining the appropriate unit, the board shall not:

Christian Hartsock, it should be noted, was courteous with Schultz in the portion of the interview that he published. However, he has a history of this sort of thing. He tracked me down outside a karaoke bar once, to defend the honor of his “very good friend” James O’Keefe. When he got his ass handed to him, he simply cut out the parts of the video that he didn’t like.

It’s one thing to bring your point of view to bear on a set of facts, as Ed Schultz does routinely, and with great success. It’s quite another to twist, omit, or fabricate facts to fit your point of view. That’s Hartsock’s game, but in this case, Schultz dealt  him a loss.