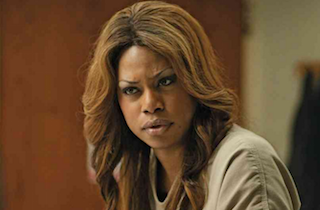 Laverne Cox made Emmy history on Thursday, becoming the first transgender person to be nominated in an acting category. She joined four of her Orange Is the New Black co-stars on this year’s nominations list, with her nod coming in the Outstanding Guest Actress in a Comedy Series category. The Netflix show scored a total of 12 nominations, including Outstanding Comedy Series.

Cox, who has been a prominent advocate for the transgender community over the last few years, received an individual message of congratulations from the president and CEO of GLAAD, Sarah Kate Ellis.

She said in a statement:

“From gracing the cover of TIME Magazine, to now becoming the first openly transgender person to be nominated for an Emmy in an acting category, Laverne Cox continues to break barriers. Today, countless transgender youth will hear the message that they can be who they are and still achieve their dreams – nothing is out of reach. Laverne’s success on a hit series is a clear indication that audiences are ready for more trans characters on television.”

As Ellis mentions above, Cox graced the cover of Time magazine back in May, appearing next to the headline, “The Transgender Tipping Point.” In that interview, she said, “More of us are living visibly and pursuing our dreams visibly, so people can say, ‘Oh yeah, I know someone who is trans.’ When people have points of reference that are humanizing, that demystifies difference.”

Vulture caught up with Cox shortly after yesterday’s Emmy nominations were announced, asking her how she was feeling. “I don’t think anybody else in the world is happier than I am right now,” she said. “I don’t think it’s possible for anyone to be happier.”

Watch the introduction of Cox’s character Sophia from season one of Orange Is the New Black below, via Netflix: