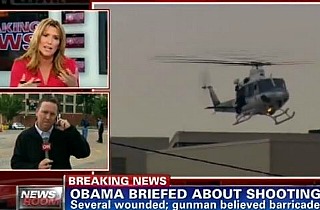 Anchoring the coverage of an ongoing mass shooting at the Washington Naval Yard, CNN anchor Carol Costello quizzed a producer on the scene about whether a military base like this has ever come under attack by a gunman before. Some have speculated that she was referring specifically to bases in the Washington D.C. area, but it was unclear why Costello did not reference the 2009 attack on Fort Hood by Maj. Nidal Hasan.

“I used to work in Washington, live in Washington. This seems so unusual to me that a gunman could create this kind of havoc at a U.S. military facility,” Costello asked her producer, Brian Todd. “Have you ever heard of this happening before, Brian?”

“I was just saying that this is so unusual, because this is such a heavily-secured military facility. I’ve worked in Washington for many years, I’ve never heard of such a thing happening,” she asked.

“Well, we haven’t either in this area, Carol,” Todd replied. “This is the first time we’ve seen something like this, at least in many, many years. Now you remember the Fort Hood shooting in 2009, where that was a member of the service who was convicted eventually of doing that shooting.”

In 2009, Hasan murdered 13 and wounded 30 others in a mass shooting at the Fort Hood military base.