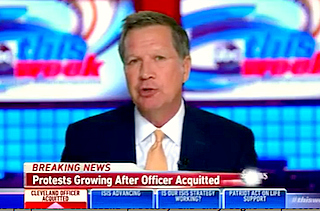 On This Week Sunday morning, Ohio Governor and potential 2016-er John Kasich (R) addressed yesterday’s acquittal of Officer Michael Brelo in the 2012 shooting death of an African American couple, commending the city of Cleveland for avoiding violence, and pledging that the state was focused on improving the tensions between law enforcement and the African-American community.

“The verdict is the verdict,” Kasich said. “I think the people of Cleveland handled this — I mean, they should be so proud of themselves and we should look at Cleveland as a model…Violence in a community only destroys the community.”

“The people in Cleveland protest, and they ought to protest, that’s their right,” Kasich continued. “But violence has been kept to an absolute minimum in that city.”

Host Jon Karl asked about the shooting death of 12-year-old Tamir Rice; Kasich reemphasized a task force, which he acknwoledged was not the “total solution.”

“I’m very, very sensitive to this issue; when there are large numbers of people who don’t think the system doesn’t work for them, we have to respond to it,” he said. “We have been very aggressive in terms of saying we hear you, we understand it, there are going to be a series of additional recommendations that’s going to respond to the fact that community needs to understand police and police need to understand community.”