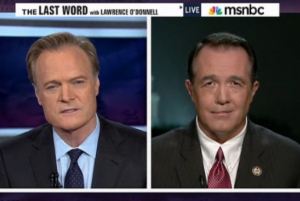 MSNBC’s Lawrence O’Donnell had an engaging–and at times tense–discussion of high-capacity magazines with Rep. Trent Franks, who resisted O’Donnell’s efforts to get a clear answer to the question, “Congressman, don`t you wish Jared Loughner had a smaller capacity ammunition clip when he went to Gabby Giffords` event in Tucson?”

O`DONNELL: Congressman Franks, I`ll try again. Do you wish that his gun held 10 bullets instead of 31 bullets?

FRANKS: I wish he had not had a gun and he shouldn`t have a gun at all. He was, I think, mentally ill, and we have laws against that in many places. And I think to focus on the clip is like saying that, you know, we`ll combat drunk driving by limiting the size of fuel tanks.

Which didn’t satisfy O’Donnell either. The back-and-forth continued, with O’Donnell resisting the Congressman’s every effort to move past the original question:

I`ll ask you again — do you wish Jared Loughner`s magazine only held
10 bullets instead of the 31 that he fired?

FRANKS: And I will tell you again, sir, that I wish he had not had a gun at all.

O`DONNELL: No, I will not say that.

The must-see exchange led up to this moment, where O’Donnell makes clear he holds the government culpable for shooters who can keep on firing:

FRANKS: Well, I give every credit to those who stopped him. But I will say to you again to blame the gun rather than the individual is why we continue to have these problems.

O`DONNELL: I blame the individual for the first 10 bullets. I blame the law for the next 21 bullets that he fired.