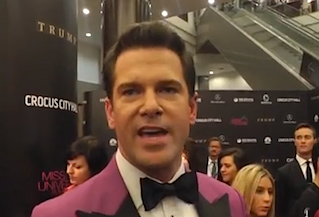 Openly gay MSNBC anchor Thomas Roberts made news last month when he announced he would be stepping in as host of the Miss Universe pageant held in Moscow, Russia. While that country’s anti-gay laws caused previous host Andy Cohen to step down, Roberts viewed the situation as an opportunity. “Courage is contagious,” he wrote. “This November, I will co-host Miss Universe in Moscow partly because it is a huge, visible opportunity for LGBT people. Everywhere.”

Roberts lived up to that promise, at least on the show’s red carpet Saturday, where he spoke out publicly against Russia’s “discriminatory” laws. “I know the law is very vague and still hard to interpret for many people,” Roberts said. “But it is discrimination and that’s definitive. And I don’t think that the LGBT population in Russia or anywhere should be marginalized to that degree.”

“We are not asking for special protection,” Roberts continued. “We’re just asking for equal respect.”

While in Moscow, Roberts also got a chance to interview Donald Trump, who is a co-owner of the Miss Universe Organization. Previously, Trump told Roberts that he is still against same-sex marriage, but speaking today in Russia, he revealed that his attitude may be slowly “evolving,” much in the same way that President Obama’s did.

Trump also acknowledged the controversy surrounding Russia as the site of this year’s pageant. “Perhaps we should have known and we didn’t, and after we signed it became quite clear,” Trump said. “We have a lot of gay people who work at Miss Universe, and we said, ‘What do you think?’ And they said, ‘We want to go. We want to show our stuff.’”

Watch video below, via RT: