Pizza Shop Owner Who Bear-Hugged Obama: ‘It Seemed Like I’d Known Him For Years’
video

Pizza Shop Owner Who Bear-Hugged Obama: ‘It Seemed Like I’d Known Him For Years’ 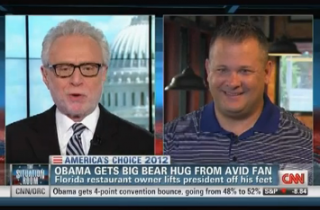 President Barack Obama received the warmest of welcomes during an unplanned Sunday stop to Florida’s Big Apple Pizza and Pasta, where surprised restaurant owner Scott Van Duzer was so overcome with emotion and elation that he picked up the commander-in-chief during a “spur of the moment” bear hug. Don’t think the president was insulted or anything, though. Van Duzer said Monday that the embrace felt right and as if he’d known our nation’s leader for a long time.

“I guess I got caught up in the moment,” Van Duzer told Wolf Blitzer during an episode of The Situation Room. “I had a brief moment when I knew he was coming. He opened up the door and he was like, ‘Where’s Scott at?’ As soon as I saw him, he came right at me, shook my hand. I was so excited, I picked him up.”

When Blitzer questioned whether Van Duzer encountered any issues with Secret Service lifting the president, Van Duzer said, “I’m telling you, Wolf, just spur of the moment. We didn’t plan it, we didn’t have no communication with the Secret Service…I felt comfortable being able to pick him up.”

“The way he came in, just his enthusiasm, [he seemed] genuinely excited to be here,” he continued. “It didn’t feel like it was just another stop on his bus tour. And like I said when he came in it seemed like I’d [known] him for years. His enthusiasm was contagious. Like I said, I just picked him up and the rest was history…It was awe inspiring.”