Sandra Fluke Responds To Monica Crowley: Where I’m From, We Say Congratulations Not Engage In ‘Hate Speech’
video

Sandra Fluke Responds To Monica Crowley: Where I’m From, We Say Congratulations Not Engage In ‘Hate Speech’ 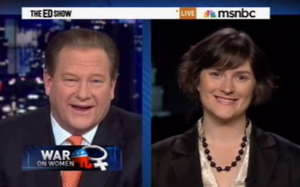 Getting word that Sandra Fluke is engaged, Fox News analyst Monica Crowley tweeted, in response, “To a man?” Unsurprisingly, what Crowley called a joke didn’t sit well with many — and Fluke herself responded to the remark on Ed Schultz‘s show Thursday night. Referring to Crowley’s comment as “hate speech,” Fluke said the “blatant homophobia” is what bothered her.

Schultz called Crowley’s words “cruel and homophobic,” and said she implied that supporting women’s rights must mean you’re gay, and being gay must mean you’re “a lesser person?” He then asked Fluke for her reaction. “Well, you know, where I’m from, when someone tells you they’ve become engaged, you say congratulations rather than engaging in hate speech,” she said. “It’s certainly not the way I wanted my engagement to be greeted.”

Fluke went on to add, “That said, I’m not going to let this kind of thing get to me personally. What really bothers me about it is exactly what you said, the blatant homophobia in the comment. The idea that’s an acceptable thing to say publicly.”

Schultz asked whether she wants an apology, which she said she doesn’t personally. But, she added, Crowley may owe an apology to the LGBTQ. While the remark was “nasty and negative,” Fluke said she wouldn’t characterize Crowley personally because she doesn’t know her. “I don’t really care if it was a joke,” she said. “If it was a joke, it was a homophobic joke.”