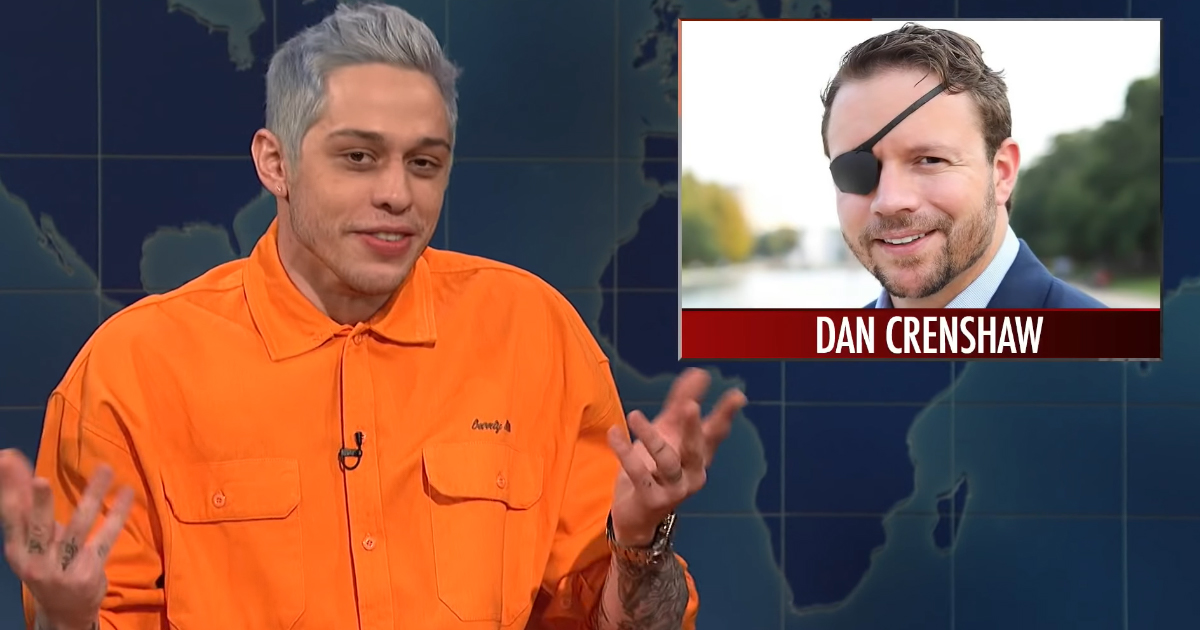 Saturday Night Live’s Pete Davidson was big news recently after he was dumped by Ariana Grande, and last week decided against running with a skit about her that he’d written for Saturday’s show. But the bit he kept – making fun of Republican Dan Crenshaw‘s war injury – might have been the better clip for the cutting room floor. At least if you measure by social media backlash, that is.

The joke, such as it was, was a flippant remark about Crenshaw having lost his eye “in war, or whatever.” Crenshaw is running as a Republican in the Texas’ second congressional district. He lost that eye in an IED blast while deployed for a third time to Afghanistan. In the blast, his right was also severely damaged, leaving him blind. After several surgeries, some sight was restored in the right eye, and Crenshaw, who was a Navy SEAL, continued to serve.

Here is the joke about that, from Davidson.

Totally cheap, disgusting and classless of SNL to have Pete Davidson mock Dan Crenshaw for wearing an eye patch…then giggle that he was injured in the line of duty.@DanCrenshawTX is a Navy SEAL and hero who lost his eye in an IED attack in Afghanistan. pic.twitter.com/7VbMohQ3t2

The negative reception was widespread, including from Fox’s Greg Gutfeld, The View‘s Meghan McCain, Politico’s Jake Sherman, several politicians, and even the National Republican Congressional Committee.

"lost his eye in war or whatever."….. this is @snl – they address a cast members breakup as if it's of vital importance. but laugh at a vet. https://t.co/4xoMLCKWTH

This is really awful and incredibly tone-deaf and offensive to veterans, their families and all who serve. Come on SNL, do better. https://t.co/9WsBg0qEpe

This is absolutely disgusting. The guy did three combat tours as a Navy SEAL. Not funny in any way, shape or form. https://t.co/c7IO308HXn

The same SNL that was too cowardly to take on Harvey Weinstein mock a wounded war vet:

SNL has devolved into the Dem’s favorite weapon to attack anyone they don’t agree with, or who doesn’t bow down to the extremist policies of the left. Mocking @DanCrenshawTX, my former Congressional fellow, and Navy SEAL who was gravely wounded in Afghanistan, is disgusting. https://t.co/AfiEH1ZKCo

I see why he got kicked to the curb. I wouldn’t go near this classless loser. Dan Crenshaw looks awesome though! https://t.co/gV9dyP7zlX

.@DanCrenshawTX is a classmate, friend, and patriot. I was proud to found Breaking Bread with him, a group dedicated to crossing partisan divides. Dan and I may disagree politically, but he has served and sacrificed for his country. He deserves our respect. SNL must apologize. https://t.co/xDBFYdNoXp

Sad and nasty, but in political terms, Dems lose most from this. Crenshaw is already 9-1 to win, and at margin, this risks turning independent voters against Dems. Perhaps Pete Davidson's "jest will savour but of shallow wit, when thousands weep more than did laugh at it" https://t.co/8hZ0AUFeHb

Dan Crenshaw served 10 years as a Navy SEAL. He received two Bronze Stars, a Purple Heart, and the Navy Commendation Medal with Valor.

The NRCC issued a statement on the incident.

“Getting dumped by your pop star girlfriend is no excuse for lashing out at a decorated war hero who lost his eye serving our country. Pete Davidson and NBC should immediately apologize to Dan, and to the millions of veterans and military families who tune in every weekend – because they’re not laughing,” wrote spokesman Jack Pandol for the NRCC.

Everyone broke up with Pete Davidson, it seems. This probably didn’t go the way they thought it would, but that may be because it was a Republican, and not a Democrat, who was being mocked.

Good rule in life: I try hard not to offend; I try harder not to be offended. That being said, I hope @nbcsnl recognizes that vets don’t deserve to see their wounds used as punchlines for bad jokes.

“I try hard not to offend; I try harder not to be offended,” he wrote. “That being said, I hope @nbcsnl recognizes that vets don’t deserve to see their wounds used as punchlines for bad jokes.”