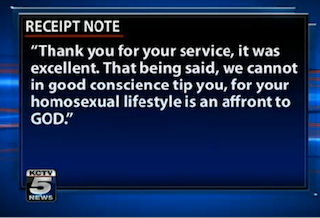 A 20-year-old waiter at Carrabba’s Italian Grill in Overland Park, Kansas received a particularly hateful message instead of a customary tip from some patrons who were offended by his “homosexual lifestyle.” The customers even acknowledged the waiter’s “excellent” service, but said they could not “in conscience” leave him a tip.

The full note, written on the back of the check, read:

Thank you for your service, it was excellent. That being said, we cannot in good conscience tip you, for your homosexual lifestyle is an affront to GOD. Queers do not share in the wealth of GOD, and you will not share in ours. We hope you will see the tip your fag choices made you lose out on, and plan accordingly. It is never too late for GOD’S love, but none shall be spared for fags. May GOD have mercy on you.

A reporter for Kansas City’s KCTV said that as news of the insult spread on social media, other restaurant regulars began sticking up for the waiter. They have coming to the restaurant over the last few days to give him extra big tips as well as emotional support.

In a statement, Carrabba’s Italian Grill said, “We do not tolerate discrimination–from either our employees or our guests. We embrace diversity and believe in treating everyone with respect.”

As New York Magazine’s Dan Amira pointed out, the restaurant is “about an hour’s drive” from the notoriously homophobic Westboro Baptist Church.

Watch video below, via KCTV: