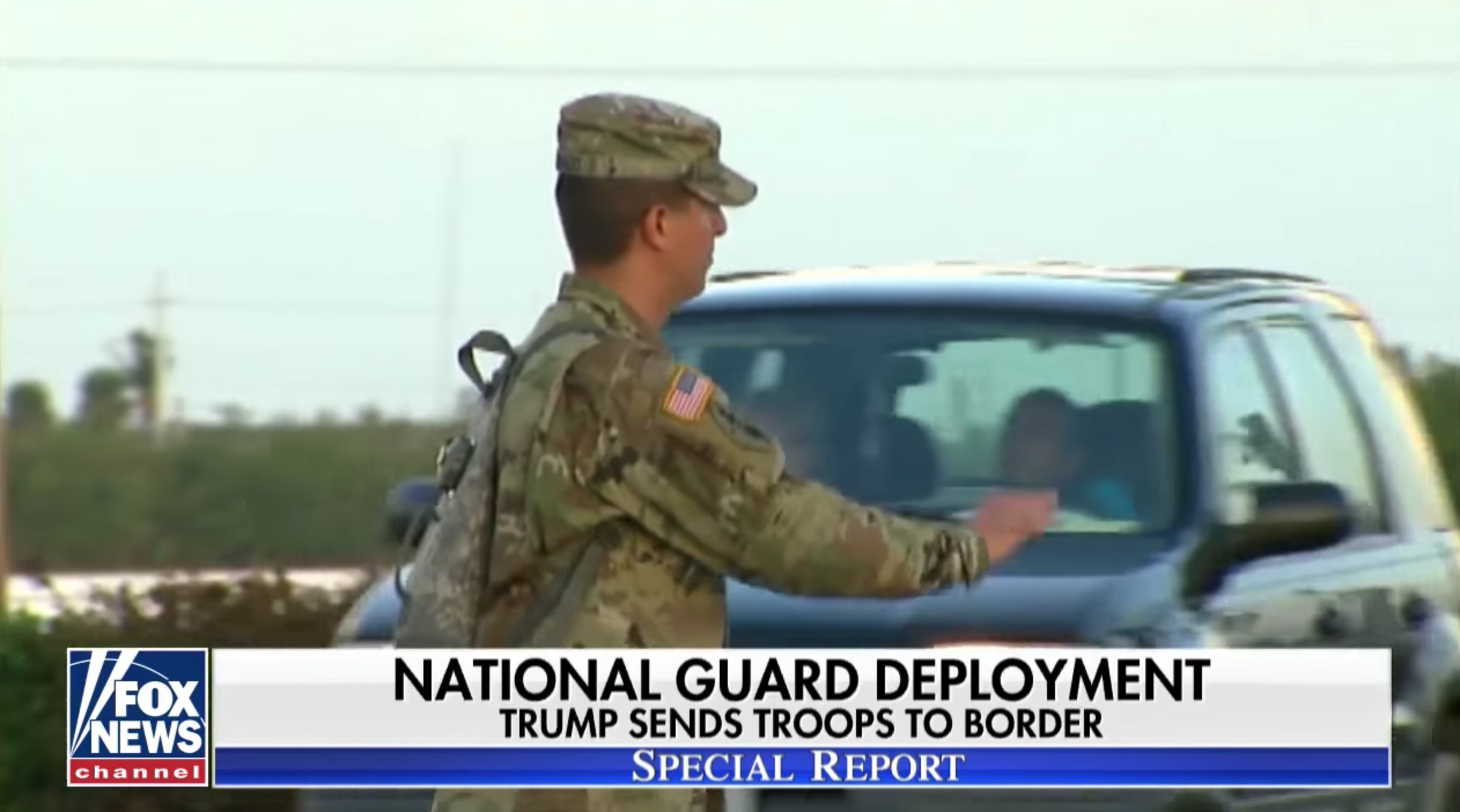 Donald Trump’s campaign rallies were known for one, signature exchange between Trump and his adoring fans. That, of course, was when Trump would ask his supporters–in between demonizing Muslims and Latino immigrants–this question: “We are going to build a wall and who’s going to pay for the wall?!?” And the crowd would respond in unison: “Mexico!” And again Trump would bellow: “Who’s going pay for it?” To which the fired-up audience would respond on cue: “Mexico!”

Well, in light of the news that Trump is now sending the National Guard to the United States-Mexican border, Trump’s trademark exchange needs to be updated for future rallies to Trump asking: “Who’s going to pay for the national guard to patrol the border?!” And the crowd responding: “We are!”

To sum up, Trump is sending the National Guard because the self-described dealmaker failed not once, but twice, to get his beloved wall built. First, despite bragging time and time again that he would make it happen, Mexico refused to pay for Trump’s monument to white supremacy.

So then Trump looked to the Republican controlled Congress to fund his wall. What happened there? Trump failed again. Trump had asked his buddies Paul Ryan and Mitch McConnell to include in the massive omnibus spending bill that clocked in at a whopping $1.3 trillion dollars for a measly $25 billion to build his wall. What did the author of the Art of the Deal settle for? A paltry $1.6 billion in limited border security measures.  And that money was specifically authorized “to go toward repairing existing fencing or toward double fencing where barriers already exist,” not to building Trump’s wall.

Adding insult to injury, Trump’s recent signing of that hippopotamus-sized spending bill earned him the wrath of many “big name” conservatives, from Ann Coulter to Laura Ingraham. Far more important than the reaction of these self-aggrandizers, however, was the response of the conservative base. While I host a radio show on SiriusXM radio’s progressive channel, I periodically tune in to its conservative channel. I don’t do that to hear the right-wing media elites pontificate. Rather, I listen to hear what the conservative base has to say. And I can tell you the day Trump signed that omnibus bill it was universal condemnation, with  Trump’s supporters voicing their outrage and many vowing not to vote come the 2018 midterm elections.

Typically, when things are going this badly for Trump, he files for bankruptcy. But instead he did the next big thing from his point of view and that is get us – you and I — to pay for his failures by footing the bill to send the National Guard to border.

As of now, we don’t know exactly how the costs will be borne for the troops — will the federal government reimburse the states? — but make no mistake, taxpayers will be left holding the bag.

Presidents George W. Bush and Barack Obama also called on the National Guard to help with border security. How much did that cost? Well, during Obama’s presidency, 1,200 National Guard troops helped Border Patrol agents “apprehend 25,514 illegal immigrants at a cost of $160 million — or $6,271 for each person caught.” That price tag elicited the wrath of fiscal hawks at the time.

Now there are vast differences between Trump and these other two past presidents. Neither Bush nor Obama had promised that a massive 2,000-mile wall would be built and paid for solely by Mexico.

Plus there’s another tremendous difference. Trump’s wall is not just about border security. After all Trump has repeatedly bragged that the number of attempted crossings at our southern border were way down in 2017 as compared with 2016. In fact, the 2017 fiscal year marked a 45-year low for Border Patrol arrests.

Securing the border is red meat for Trump’s bigoted base who desperately want to “Keep America White.” Trump hasn’t been able to deliver the total ban on Muslims he promised them, but he did end DACA as they demanded so that thousands of young primarily Latino Dreamers would be deported. This show of force at the border might placate those Trumpers outraged by his signing of the massive omnibus spending bill. Ironically, though, Trump will be spending their tax dollars to serve them red meat. Will they care? Probably not, if it prevents the browning of America.

Keep in mind, however, that only 38 percent of Americans support the building of this wall — likely because of the high price tag and the reality that nearly two-thirds of the undocumented immigrant population actually entered the United States legally and then overstayed their visas. That translates into 62 percent of Americans who don’t support the wall and who might very well be ticked off with Trump spending our tax dollars to send National Guard troops to the border. And those who will bear the brunt of that anger won’t be Trump, but the Republicans up for re-election this November who might find themselves swept out of office by a beautiful “Blue Wave.”