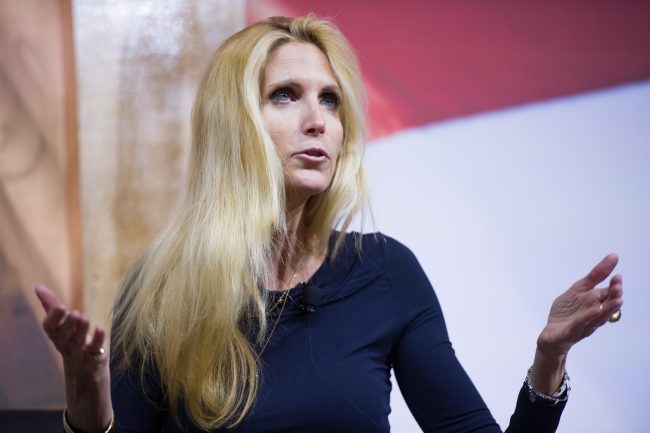 Coulter’s tweet was in response to Trump’s tweet — also late Friday night — in which the president insisted that agreeing to the resolution to fund the government for three weeks was “in no way a concession.”

The resolution, which Trump signed on Friday night, has no funding for the wall.

“I wish people would read or listen to my words on the Border Wall,” Trump wrote. “This was in no way a concession. It was taking care of millions of people who were getting badly hurt by the Shutdown with the understanding that in 21 days, if no deal is done, it’s off to the races!”

Coulter was one of the conservative voices blamed for influencing Trump and helping to spark the shutdown back in December.

She also lashed out at Trump earlier today in a tweetstorm after the news broke a deal had been reached and the shutdown was ending, writing “Good news for George Herbert Walker Bush: As of today, he is no longer the biggest wimp ever to serve as President of the United States.”

Good news for George Herbert Walker Bush: As of today, he is no longer the biggest wimp ever to serve as President of the United States.

Obviously the gov't shutdown hasn't gone far enough if the corrupt & incompetent FBI still has funds for a Keystone Cops stunt like the pre-dawn raid on Roger Stone.

Sure feel safer today, with the feds taking Roger Stone off the streets. No need for a border wall now. Nothing to fear from MS-13. #OurTaxDollarsAtWork

Trump tweets about Roger Stone raid, "Who alerted CNN to be there?" Just think! If you were president, you could haul the FBI director's ass into the Oval Office and ask him yourself.

Maybe the solution to the border crisis is not deporting 22 million illegals but one Jared Kushner.

In an effort to explain the president’s move,  the White House also issued a statement — via Sarah Sanders and separate from Trump’s tweet –claiming that in 21 days, Trump is moving forward with his plans to build the wall, Democratic support or not.

Sanders’ statement — also in a tweet — gave no indication on how Trump planned to make that happen.