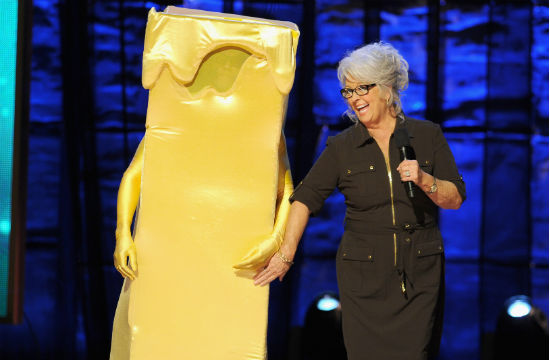 You know all those times Food Network features Paula Deen’s Savannah, Georgia restaurant on TV? Whether it be a special occasion on Paula’s show, or on a Triple D segment, The Lady and Sons always strikes us as a warm, cozy, country lodge diner. The kind us Yankees might stumble into on a road trip through Rhode Island or some nonsense. Yes, it’s almost exclusively filled with morbidly obese patrons, but it’s also got like, kitschy Cracker Barrel charm, right?

Wrong. How very wrong we were to ever, ever think that.

The sunshine-y Food Network portrayal of Paula’s eatery is completely misleading, but thanks to this Food Republic review, we have seen the light. And by the light, we mean the dark, buttery hole. Here’s a glimpse of what the restaurant looks like when it’s busy, and this is before the dude even steps inside:

“The Lady and Sons occupies nearly a whole city block in the part of Savannah most heavily frequented by the most heavy tourists. They form lines that encircle the brick building in which the three-story restaurant is housed. Old timey trolleys disgorge them at lunchtime to stand, their pale legs like thick human stalagmites shifting in the hot sun, and to wait and wait until their name is called.”

And did you know The Lady and Sons is attached to a Paula Deen giftshop, where you’re instructed to wait for a table, should there be a line at the time of your reservation?

“There were keychains that said ‘Hey Y’all’ in bedazzled cursive and red plastic sippy cups that said, in MT Curlz, the world’s worst font, ‘S.L.U.T.S.’ That stands for Southern Ladies Under Tremendous Pressure.”

And then, also, racism:

“Two old ladies next to me beckoned to Akil, though they were not in his section. ‘Oops,’ they said, ‘you looked like the other one.’ Akil called over to the other one. Beyond both being black, the two did not look alike at all. ‘C’mon,’ said Akil, ‘you really think we look alike?’ The women strenuously insisted they didn’t look anything alike. It was an extremely satisfying interaction to observe.”

You can read all about the salty, greasy fried chicken buffet that resembles the mountains of Mordor here. Oh yeah, most people choose to eat at the buffet.