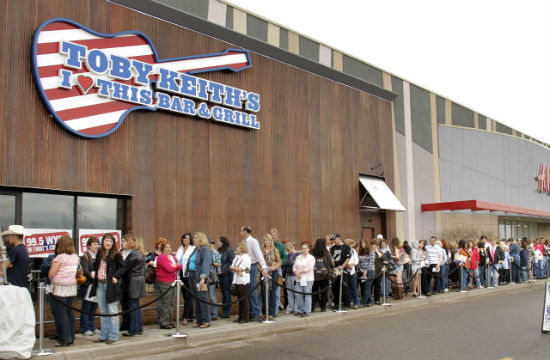 We don’t know if you knew this, but country music superstar Toby Keith has a chain of restaurants cheekily named Toby Keith’s I Love This Bar & Grill, named after a song, or something. It’s cute. Anyway, one of these restaurants happens to live in the state of Virginia, which is an open carry state, meaning it’s perfectly legal to tote your guns around on display on display on display. Except in establishments that ban guns. Such as Toby Keith’s I Love This Bar & Grill in Woodbridge, which recently put a No Guns Permitted sign on its door, because, you know, copious amounts of whiskey get served there.

They also posted this perfectly sensible statement on their Facebook page:

“While we understand and respect every person’s right to own and bear arms, we at Toby Keith’s I Love This Bar and Grill, with guidance from the State of Virginia and based on insurance regulations, have adopted a no weapons policy. It is our desire to provided a safe, enjoyable and entertaining experience for our patrons and staff.”

Over which the Facebook-verse…well…freaked out.

Some of our favorite comments (all from apparent men) include:

“You’re a traitor to this country you sorry piece of trash” …At least he used the right “you’re.”

“Do yall notice that most of the females support the no-gun policy…that is why you have a damned liberal in the White House !! 75% of women are liberals who want to depend on the government.” Statistics!

“Hey Bat Guano…so now if there ever is a crazy wing nut in the restaurant running around cutting people’s throats with a steak knife, you can stop him by throwing your iced tea in his face…liberal idiot !!!!” DEFENSE TACTICS.

“You work in COUNTRY MUSIC, respect your audience! You saw what happened to the Dixie Chicks when they turned against America.” Oh shit, homeboy DID NOT just drag the Dixie Chicks into it, HOLD US BACK.

On the flip side, most of the Top Comments positively support the restaurant’s decision, with Moms Demand Action, a gun control lobbying group, expressing their thanks.

Feel free to sift through the detritus for more zingers here.