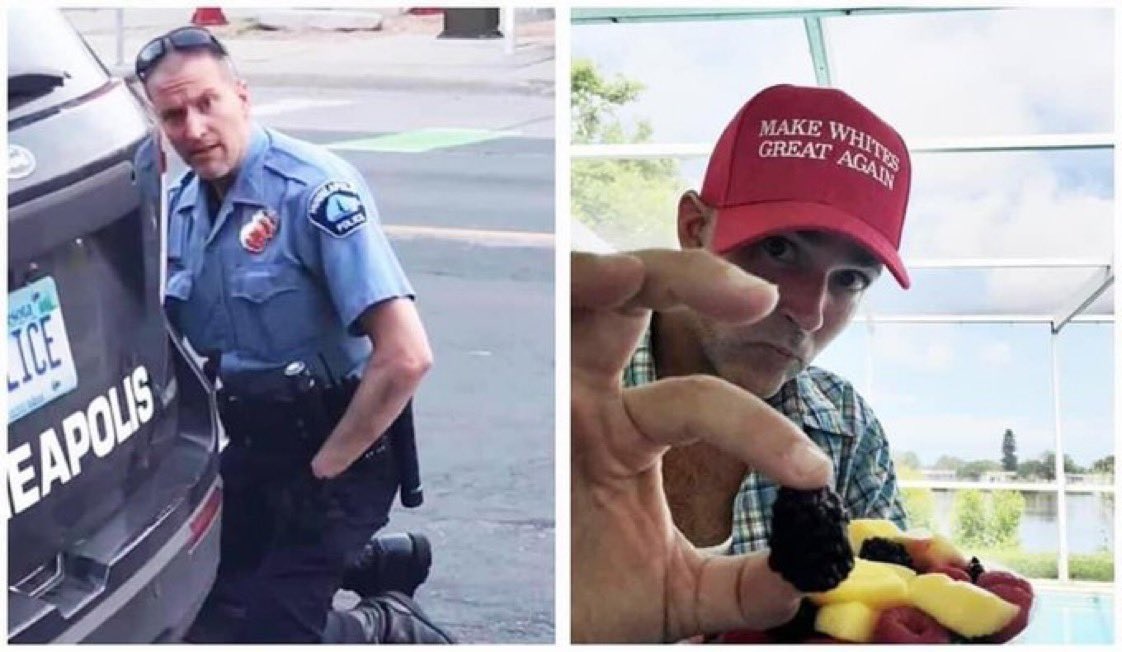 The fake news was shared by prominent commentators and celebrities, including rapper Ice Cube, who incorrectly claimed that pictured man was police officer Derek Chauvin.

A wolf in wolves clothing. The demons are among us. #Fightthecowards pic.twitter.com/UYw7zXNabQ

Here is Derek Chauvin, the racist cop who kept his knee on #GeorgeFloyd’s neck, cut off his air passage and murdered him, wearing a “Make Whites Great Again” hat, a clear sign that this piece of excrement should’ve been taken off the streets a long time ago.#JusticeForFloyd pic.twitter.com/KxGxHAIzlH

His name is Derek Chauvin, and Of Course, he has a “Make Whites Great Again” Hat.

Getting fired is NOT enough!

He needs to be charged and convicted of MURDER then allowed to face prison justice for his crimes against humanity#justiceforfloyd #DerekChauvin pic.twitter.com/zTtqhL3gYB

But the photo was soon debunked by journalists, who noted that the two men were not the same.

Please stop sharing the photo of the guy in the “Make Whites Great Again” hat. It isn’t Derek Chauvin. He’s a zombie troll.

If something seems too outrageous to believe, it often is. https://t.co/Rf23limat4

Uber vigilance is needed in the new world of social media. The white supremacist in the hat is not the cop; post was photoshopped on Facebook & Make Whites Great Again is trending.

As yourself, what was the intention? Always the same: to create anger and division on both sides https://t.co/DdfjmYqkEm

The man in the “Make Whites Great Again” hat is Johnathan Lee Riches.

?A “Bishop” everyone, I feel sorry for the fools that learn the word of God out this church. https://t.co/htj2jJoZln

The person in the “Make Whites Great Again” hat ( which is photoshopped) is not #DerekChauvin the race soldier who lynched #GeorgeFloy. It’s another suspected white supremacist named Jonathan Riches. That’s why I never tweeted that fake photo because pic.twitter.com/tuxhRD6NLH

The false claim, however, was shared so many times that “Make Whites Great Again” became one of the top trending topics on Twitter, Wednesday, with over 30,000 instances listed by the social network.

Another viral photo purporting to show the police officer at a Trump rally was also debunked.

Update: @mattdelong at @StarTribune says they’ve confirmed the man IS NOT one of the #GeorgeFloyd cops. So please don’t share memes that say it is. https://t.co/cH9DQBVVRu

Floyd died in custody after his neck was kneeled on by a police officer for minutes, despite complaining that he couldn’t breathe.