Late Saturday evening, police officers Officers Benjamin J. Deen and Liquori Tate died after being shot while on-duty in Hattiesburg, Mississippi. Three suspects have been charged in connection with the shooting, two with several counts of capital murder.

The shooting occurred after a traffic stop. Per NBC News and the Associated Press:

A Hattiesburg officer had stopped a 2000 Gold Cadillac Escalade in an industrial corridor about 8:30 p.m. CDT.

Strain said a second officer arrived to help and shots were fired. He said the shooting occurred near an area of apartment houses and that officers had told people immediately afterward to “take shelter” while they searched for two suspects.

The suspects fled in one of the officer’s vehicles, which was later found abandoned near rail road tracks, officials told WDAM.

According to The Clarion-Ledger, the two currently-unnamed officers were taken to Forrest General Hospital, where they were confirmed dead. One of the officers was reportedly still alive upon arrival. According to local news services, the officers are the first in the area to die in the line of duty since 1984.

The suspects have been identified as Marvin and Curtis Banks: 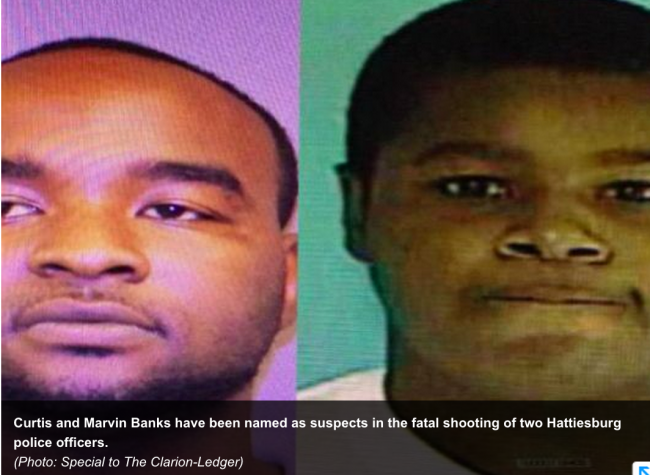 Below are Tweets from WDAM Reporter Ryan Moore in Hattiesburg, MS:

Call began as a traffic stop near Bouie Street just before 8 pm. Two officers shot in the stop. One officers vehicle was stolen from scene

One of the 2 officers patrol cars at the scene. #WDAM pic.twitter.com/ky8jMrVAqp

All 3 suspects transported out of Forrest Co. to be housed until initial appearance for the death of 2 HPD officers. pic.twitter.com/5xeaBjs5CY

Watch the report from Fox below: