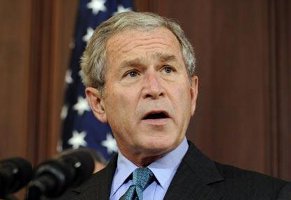 Former President George W. Bush seemed content as “the retired guy” on The O’Reilly Factor last night, but if the American Civil Liberties Union has anything to do with it, that retirement probably won’t be quite as peaceful as he envisioned.

In his new book, Decision Points, Bush details how he authorized the waterboarding of certain terror suspects, even though the practice is largely considered to be a form of torture and was since banned by the U.S. Well, the ACLU isn’t happy with the admission – and they think it’s worth a criminal investigation.

From a letter from the ACLU to attorney general Eric Holder:

“The ACLU acknowledges the significance of this request, but it bears emphasis that the former President’s acknowledgment that he authorized torture is absolutely without parallel in American history. The admission cannot be ignored. In our system, no one is above the law or beyond its reach, not even a former president. That founding principle of our democracy would mean little if it were ignored with respect to those in whom the public most invests its trust. It would also be profoundly unfair for [Assistant U.S. Attorney John] Durham to focus his inquiry on low-level officials charged with implementing official policy but to ignore the role of those who authorized or ordered the use of torture.”

While it’s a bit hard to imagine Holder actually following through on that request, considering the firestorm that would undoubtedly follow, the ACLU isn’t the only group making this kind of statement: Amnesty International recently said Bush must be prosecuted in the wake of his admission. Either way, none of this talk is likely to faze Bush. If anything is clear from his frank admissions and recent interviews to promote Decision Points, it’s that this is someone at peace with what he did as president…and someone who’d much rather leave the fierce debate over his actions to everyone else.