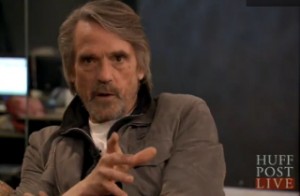 During a HuffPostLive interview this past Wednesday, Academy Award winner Jeremy Irons made some controversial remarks when asked about gay marriage, questioning whether it could ultimately lead to a father marrying his son in order to avoid estate taxes.

On his website on Friday, Irons posted a response to the controversy:

I am deeply concerned that from my on line discussion with the Huffington Post, it has been understood that I hold a position that is anti gay. This is as far from the truth of me as to say that I believe the earth is flat.

I was taking part in a short discussion around the practical meaning of Marriage, and how that institution might be altered by it becoming available to same-sex partners. Perhaps rather too flippantly I flew the kite of an example of the legal quagmire that might occur if same sex marriage entered the statute books, by raising the possibility of future marriage between same sex family members for tax reasons, (incest being illegal primarily in order to prevent inbreeding, and therefore an irrelevance in non reproductive relationships). Clearly this was a mischievous argument, but nonetheless valid.

I am clearly aware that many gay relationships are more long term, responsible and even healthier in their role of raising children, than their hetero equivalents, and that love often creates the desire to mark itself in a formal way, as Marriage would do. Clearly society should find a way of doing this.

I had hoped that even on such a subject as this, where passions run high, the internet was a forum where ideas could be freely discussed without descending into name-calling.

I believe that is what it could be, but it depends on all of us behaving, even behind our aliases, in a humane, intelligent and open way.