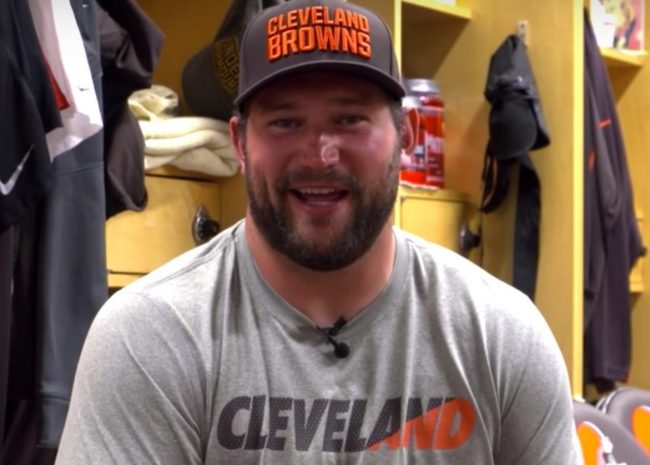 We’ve previously chronicled the Twitter exploits of All-Pro Cleveland Browns offensive lineman Joe Thomas — who, several weeks ago, Tweeted that free agent quarterback Colin Kaepernick would be a distraction for his new team because of his National Anthem protests in 2016.

On Monday, Thomas took up a more popular cause which pretty much…well…”United” everybody.

In a humorous series of Tweets, the Cleveland Browns star ripped United Airlines for dragging a man off of a flight for refusing to give up his seat after his flight was overbooked.

Dear United Shareholders,
We’d like to introduce you to your new majority shareholder. Signed, your legal council. pic.twitter.com/cGLpsoAEGH

You think the guy in the orange shirt is wondering why the kid behind him keeps kicking his seat? https://t.co/WsxHyldvmC

But what really drew the ire of Thomas was the statement from United CEO Oscar Munoz — in which Munoz apologized for having to “re-accommodate” the man in the video and other passengers on the overbooked flight.

“…having to re-accommodate?” That’s what we’re calling it? https://t.co/KotBnQYpF5

Dear #united, I had to “re-accommodate” someone once pic.twitter.com/MP3ZJDv85m

Would you rather be…

As of this writing, 84 percent of the approximately 20,000 respondents said they would prefer to be body slammed by The Rock.