Allen West Was for Impeaching Obama Before He Was Against It

Allen West Was for Impeaching Obama Before He Was Against It 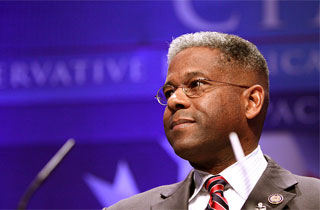 At the moment, Republicans are desperately trying to rein in any talks of impeaching President Barack Obama after realizing that Democrats are making quite a bit of cash off it. Chief among them is Rep. Allen West (R-FL), who exhorted his blog followers to avoid getting hyped about the prospect of impeaching Obama, “as much as you’d like to.”

Currently, Democrats are winning the money battle “based on generating fear among their base over something that’s not happening,” West wrote. “They’ve been successful in forcing Americans to accept a lawless president, all for political gain.”

A piece of prudent advice? Judging from the three fundraising emails and one vehement column he wrote as recently as a month ago, in which he proposed to impeach Obama over the Bowe Bergdahl scandal, maybe not. And boy oh boy, was West all for Making It Happen.

Media Matters unearthed this column published on June 3rd on West’s website, of which there can be no misinterpretation:

Ladies and gentlemen, I submit that Barack Hussein Obama’s unilateral negotiations with terrorists and the ensuing release of their key leadership without consult — mandated by law — with the U.S. Congress represents high crimes and misdemeanors, an impeachable offense.

So I call upon the leadership of the U.S. House of Representatives; Speaker John Boehner, Majority Leader Eric Cantor, Minority Leader Nancy Pelosi to draft articles of impeachment as no one is above the law in America. The failure to do so speaks volumes.

West also hit upon these talking points in fundraising emails sent out on June 19th, June 28th, and July 10th, the day that Sarah Palin dragged the impeachment talk into the mainstream. Immediately after Palin’s op-ed, however, conservative politicians and commentariat unilaterally rejected the idea of impeachment.

You built this monster, West.