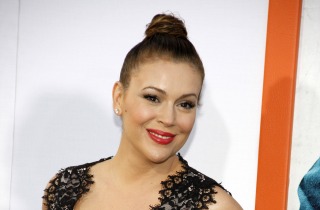 Actress Alyssa Milano made it known to her almost 3 million followers that she wasn’t happy with London’s Heathrow Airport after her breast milk was apparently confiscated.

Milano, a mother to a 3-year-old and a seven-month-old, was carrying 10 ounces of breast milk in her bag. But according to government rules, Milano is not allowed to carry more than 100 milliliters of it unless she is accompanied by her baby.

The milk was therefore taken from her. The actress was obviously very irritated by the incident, and took to Twitter to lament about what had just happened:

(1 of 2) @HeathrowAirport just took my pumped breast milk away. 10 ounces. Gone. Not okay.

.@HeathrowAirport Why can you test my toiletries to make sure they are safe but you have to throw away my breast milk?

.@HeathrowAirport I was told I would be fine if the baby was with me. Plus, it was less than 5 ounces per container. Why is my shampoo okay?

PS. Another reason it makes no sense – when I got past security it was time to pump again so… I did carry on 5 ounces of breast milk.

@Alyssa_Milano Hi Alyssa. Unfortunately, without a baby present, the government requires all liquids in carry-ons to follow the 100ml rule.

@Alyssa_Milano Sorry for any confusion caused. To confirm, if you aren't travelling with your baby, milk is subject to the 100ml/(3.4oz) 1/2

I would have happily spread milk in different containers (which I travel with) to comply to those liquid rules. Instead, milk was taken away with no discussion. Shampoo, lotions, etcetera were simply tested and handed back with no issue. Makes no sense at all.

PPS. I travel w/ a portable Medela breast pump on the plane. Hoping this is just a weird coincidence but my other breast pump that I checked w/ the rest of my baggage… is lost. Everything arrived at my final destination except my hospital grade breast pump. Filling out a lost baggage claim now.