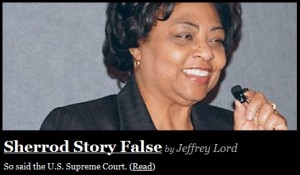 As if Shirley Sherrod hasn’t already suffered enough at the hands of the conservative blogosphere, the hits just keep coming. Last week, I brought you a preview of the right’s second bite at the apple, an emerging conspiracy smeary about Sherrod’s initial hiring by the USDA. Now, The American Spectator has accused Shirley Sherrod of lying about the lynching of a relative in order to glam up her personal history. I wish I was kidding.

As of this writing, the article is still on the front page at AmSpec, but links to the main article appear to be crashing due to traffic. There are actually five pages of this, so here are the links to cached versions: Page 1 – Page 2 – Page 3 – Page 4 – Page 5

In fairness to AmSpec’s Jeffrey Lord, it should be noted that he very bravely apologizes to Sherrod for the last time he attacked her, before launching into his new one:

After Shirley Sherrod’s firing I wrote a column congratulating Agriculture Secretary Tom Vilsack for removing her — based on a viewing of the now infamous edited Breitbart clip. I was wrong. I should have waited to see the entire video or read the transcript before writing a word. So my apologies to Ms. Sherrod.

Kum ba yah. This is the part where the needle on the record makes that movie-trailer scratching sound. Lord points to an anecdote from later in the full video of Sherrod’s stirring March 27 speech, in which she describes the killing of a relative by police:

I should tell you a little about Baker County. In case you don’t know where it is, it’s located less than 20 miles southwest of Albany. Now, there were two sheriffs from Baker County that — whose names you probably never heard but I know in the case of one, the thing he did many, many years ago still affect us today. And that sheriff was Claude Screws. Claude Screws lynched a black man. And this was at the beginning of the 40s. And the strange thing back then was an all-white federal jury convicted him not of murder but of depriving Bobby Hall — and I should say that Bobby Hall was a relative — depriving him of his civil rights.

Lord then deploys the smoking gun: court documents that describe, not a lynching, but a beating to death by police. Here’s what he points to as the exculpation of Sheriff Screws from the deed of lynching Bobby Hall:

The arrest was made late at night at Hall’s home on a warrant charging Hall with theft of a tire. Hall, a young negro about thirty years of age, was handcuffed and taken by car to the courthouse. As Hall alighted from the car at the courthouse square, the three petitioners began beating him with their fists and with a solid-bar blackjack about eight inches long and weighing two pounds. They claimed Hall had reached for a gun and had used insulting language as he alighted from the car. But after Hall, still handcuffed, had been knocked to the ground, they continued to beat him from fifteen to thirty minutes until he was unconscious. Hall was then dragged feet first through the courthouse yard into the jail and thrown upon the floor, dying. An ambulance was called, and Hall was removed to a hospital, where he died within the hour and without regaining consciousness. There was evidence that Screws held a grudge against Hall, and had threatened to “get” him.

As AJC’s Cynthia Tucker points out, the definition of “lynching” seems to encompass this activity:

It is certainly true that the widely perceived definition of “lynching” is to hang a person with a rope. Nevertheless, if this argument is really over semantics, here’s the definition of lynching, from The American Heritage Dictionary of the English Language: “To execute without due process of law, especially to hang.”
That’s especially, but not exclusively.

So, really, Sheriff Screws was guilty of a lapse in lynching etiquette, I guess. Here’s my favorite part, though, as Lord begins to guess at why Shirley Sherrod would “lie” about this:

Did Ms. Sherrod deliberately concoct this story in search of a piece of that ugly romance to add “glamour” to a family story that is gut-wrenchingly horrendous already?

In case you’re wondering what Lord’s motivation is here, you don’t have to wait long. On page 3 (did I mention there are five pages of this?), he connects the vile dots. This is all in service to defending Andrew Breitbart, who Lord presumes is innocent of knowing what he published on his own website, and for which he refuses to apologize:

But much has been made of Andrew Breitbart‘s selectively edited tape — with all manner of people using this as an opportunity to question his credibility. There is no proof — none — that Breitbart deliberately edited this tape to fashion the image of Ms. Sherrod as a government racist. Say again, not a shred of evidence.

Lord spends the remaining several pages accusing Shirley Sherrod of carrying water for the Ku Klux Klan (seriously), but if you’re like me, you’ll be crying “Uncle” about halfway through page 1.

Look, I understand the reticence of (most, not all) conservatives to denounce Andrew Breitbart. He’s a blogosphere kingmaker, a traffic rainmaker second only to Matt Drudge. However, while I can’t say this for sure, I doubt Breitbart wants this kind of “help.”

Unfortunately for Lord, he doesn’t have that magical teflon coating, and if the conservative blogosphere has any decency, he and AmSpec will suffer a withering backlash.

As for Shirley Sherrod, after watching her remarkable life story on CNN’s Who is Shirley Sherrod? special, I suspect this entire affair rates pretty low on her list of tribulations. She’ll get through this just fine, but she shouldn’t have to.