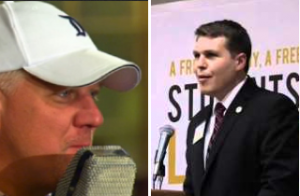 As we reported here, last Friday on his radio show, Glenn Beck went after the “Nazi,” “fascistic,” “jerk” libertarians who refuse to accept his newfound “libertarianism.” As it turns out, he was largely referring to the president of Students for Liberty (SFL), Alexander McCobin.

During his opening remarks at the 2013 International SFL Conference — the same event at which Ann Coulter called libertarians “pussies” — McCobin called on Beck to renounce his previously staunch conservative and neoconservative positions and engage the libertarian community in an “open and honest” way. Beck did not take well to such criticism, referring to McCobin as a “grand inquisitor,” among other names. – Andrew Kirell, Sr. Editor, Mediaite.

Below is an open response letter from McCobin, printed exclusively at Mediaite.

There is no reason you should have heard of me before. I’m just a guy who became enamored with the principles of liberty in 9th grade and grew to appreciate the philosophical rigor and enormous individual and societal benefits that flow from them. I’m now a graduate student in philosophy, and co-founder and president of a nonprofit organization called Students For Liberty (SFL) that began 5 years ago to support libertarian students and student organizations.

Today, SFL has over 900 student organizations in our network, is run by over 250 volunteer student leaders who are working to change the world, runs dozens of conferences for thousands of students around the world, provides a plethora of resources to young libertarians everywhere, such as 175,000 free copies of our 3rd publication, After the Welfare State. SFL is dedicated to expanding the younger generation’s understanding and appreciation of the philosophy of freedom and the benefits that may be derived from it.

This is admittedly an ambitious and long-term goal, but one that I am optimistic about and pursue because of the inherent value of liberty. I am writing this letter today because of the comments you made about me on your show this past Friday, February 22, 2013. Regrettably, you called me a Nazi, a fascist, a jerk, a guy who “thinks he’s God”. I submit I am none of those things, or at least I don’t try to be. I have no intention of getting caught up in name-calling or responding to the many strawmen you constructed and then ridiculed. There is no profit in that. It’s water under the bridge. So, I admit that my rhetoric may have been exaggerated during my opening speech at the 6th International Students For Liberty Conference on February 15, 2013 where 1,400+ young libertarians gathered to learn about the ideas of liberty and strategize how to advance freedom. But those comments resonated with the attendees, as your staffer told you, and the substantive point I was trying to make was apropos: for more than a decade, you worked very hard and very successfully at branding yourself as a key figure in conservatism, not just economic conservatism, but also social and neoconservatism. Not only are these not libertarian positions, but to associate libertarianism with them makes it that much harder to introduce libertarianism to more people, especially young people who are turned off by conservatism. After you spent over 10 years denouncing libertarianism, actively working against our causes, and building up a certain reputation for yourself directly opposed to our ideas, I think it’s reasonable for me and other libertarians to be skeptical when you suddenly claim to be a libertarian. I really hope you have changed your views and that you are committed to libertarianism (your segment on Friday included more renunciations of your past conservative positions than I have ever heard from you, which I admire). However, it’s going to take more than new window dressing for me and many others to believe that you’re a libertarian. Show us that you’re libertarian through the positions you take beyond conservatism, the groups you support, the people you invite to your show, indeed, even just in the conversations you are willing to have.

I truly hope there is an opportunity to open a constructive dialogue that could be to our, and to the cause of liberty’s, benefit. In fact, I emailed your team last week, on Wednesday, February 20th, before your February 22nd segment, and offered to have an open conversation about the meaning of libertarianism. I received a response later that evening that immediately shot me down. In short, the message I received was that you and your team had your own conception of libertarianism and had nothing more to learn about the philosophy, at least not from people like me. I am going to hope that this was an error on the part of one of your staffers rather than a true reflection of your beliefs, so will make the same offer to you here: I would like to have an open, honest conversation about the meaning of libertarianism with you if you are up for it. It can be a private conversation between the two of us if you don’t want prying ears, or it can be public for others to benefit as well. Are you willing to have that conversation?

I dislike “tribes” in the sense that I think purity tests in the libertarian movement are more often antithetical to our cause than they are helpful (see my Cato Unbound article on the subject). I embrace a big-tent approach to libertarianism. Students For Liberty even explicitly opposes purity tests in terms of particular justifications, approaches, or policies for libertarianism. However, libertarianism is not conservatism. There are meaningful differences between these philosophies and the ends we seek. That is why Ann Coulter called libertarians “pussies.” You played a portion of what she said on your show, but you didn’t actually provide the context: John Stossel was asking Coulter about gay marriage and drug legalization, and that attack was part of her response. When Coulter said two men or two women could get married so long as they married someone of the opposite sex, the room of 1,400+ libertarians made their disagreement with her very clear. Would you have expressed disagreement with her promoting the government granting benefits to some individuals and denying those benefits to others based on their sexuality? Libertarianism doesn’t just take stances on economic issues. Libertarianism supports the freedom of all people, in all areas of their lives, not just the freedom of some people to do some things that one group thinks they should. Things like marijuana legalization and non-discrimination are issues of concern to libertarians because they are clear cases of rights violations. And I am raising the question of where you now stand on them for the same reason Ann Coulter became upset with us: they are issues that clearly differentiate libertarianism from conservatism.

To be sure, libertarianism is difficult to define, and there is significant room for debate. It’s something I’ve been studying and trying to understand for a long time, something I am still studying and trying to fully understand. So I think it’s great to hear you say that you’re learning and your views are changing. Whether you believe it or not, I am in your corner more than many; I actually want to believe that you’ve changed, which is more than I can say for most other libertarians I know. I hope you will engage us in a meaningful conversation, embrace the positions where libertarianism is substantially different from conservatism, and work with us for a truly freer future.

I hope we can establish a constructive dialogue. At Students For Liberty, we are going to have a long one on our website over the course of this week, which I encourage you and everyone else to follow and participate in. Whether you want to join and grow the conversation is entirely up to you.

— —
Alexander McCobin is co-founder and president of Students for Liberty and a Ph.D. candidate in philosophy at Georgetown University.