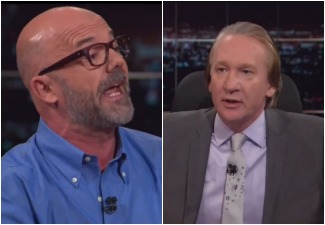 Despite Maher’s oft-cited criticisms of Clinton, the show’s host found himself forced to defend the Presidential candidate to the forceful rhetoric of Sullivan. Maher added, “Why do you hate her so much? Were you molested by a real estate lady?…she’s a boring centrist, it should never raise to the level of hate.”

Anne-Marie Slaughter also came to Clinton’s defense identifying the social achievements Clinton made at every level of her public life, arguing, “She worked for women at every single level of her career.”

Before the conversation spun even further out of control, Maher drew it to an abrupt close and settled it with “I get it — you don’t like her.”