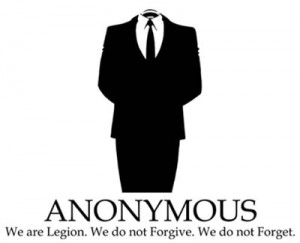 You may have heard something about a supposed online feud brewing between Anonymous, the coordinated online community that gained notoriety following their “Project Chanology” against actor Tom Cruise and Scientology, and Westboro Baptist Church, the Kansas-based group perhaps most known for demonstrating at the funerals of slain soldiers with signs reading, among other things, “Thank God for Dead Soldiers” and “God Hates Fags,” and for threatening to protest at the funeral of the nine-year-old girl killed at the fairly recent shooting in Tucson, Arizona.

Originally, reports maintained that Anonymous had issued an open letter to the WBC on February 16th, informing the group that, while it had allowed WBC to spew their message of hate and intolerance because the group adamantly supports the right to freedom of speech, it could not sit idly by and allow them to do so any longer. According the letter:

The time for us to be idle spectators in your inhumane treatment of fellow Man has reached its apex, and we shall now be moved to action. Thus, we give you a warning: Cease & desist your protest campaign in the year 2011, return to your homes in Kansas, & close your public Web sites.

Should you ignore this warning, you will meet with the vicious retaliatory arm of ANONYMOUS: We will target your public Websites, and the propaganda & detestable doctrine that you promote will be eradicated; the damage incurred will be irreversible, and neither your institution nor your congregation will ever be able to fully recover. It is in your best interest to comply now, while the option to do so is still being offered, because we will not relent until you cease the conduction & promotion of all your bigoted operations & doctrines.

Now, Anonymous has issued an open letter claiming that the original open letter had merely been a fabrication by the Westboro Baptist Church in an effort to garner attention and that, actually, many within Anonymous could not care less about the Church or its publicity-garnering antics. Writes Anonymous:

We know that YOU in fact posted the Open Letter supposedly from Anonymous.

We know that you thrive on attention.

We know that you are short of money.

We know that this is a trap.

We know how you work. You don’t give a flying fart about what your God thinks. But you know that putting God and Fag in a sentence together is guaranteed to make someone angry. You push it. You really push it. But you stay within the law. And then when some poor fool snaps, you sue them for infringing upon your rights.

Some of Anonymous thinks you’re the worlds greatest Trolls. This is bollocks. You’re in it for the money.

No doubt some of us will fall for it. But know this: most of us don’t give a damn. You are shamelessly riding on the /b/andwagon after Anonymous’ recent mass media coverage in order to get more publicity and more idiots to sue.

The group then followed up with a press release accusing WBC of orchestrating this feud in an attempt to collect IP addresses for an upcoming lawsuit should Anonymous’ members issue an online attack. It’s not a far-fetched claim by any means, given that Westboro’s founding member, Fred Phelps, is a disbarred lawyer and the group is quite well-informed about its legal rights, particularly where free speech is concerned.

Either, it’ll be interesting what, if anything, will unfold between two groups that are, often enough, both hated and feared as they each fashion themselves as advocates for free speech.