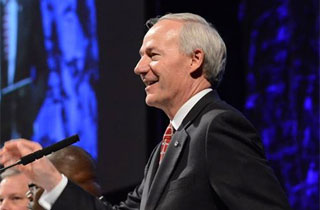 Arkansas’s state legislature today passed its own version of the the Religious Freedom Restoration Act, despite the amount of criticism aimed at Indiana this week for its similar, recently-enacted law that critics say opens a door for businesses to discriminate against LGB customers without legal repercussion.

According to the New York Times, the bill has passed through both chambers of the General Assembly, and is now on the desk of Governor Asa Hutchinson (R), who was sworn into office earlier this year. And from the looks of it, there was a concerted effort to keep the “clarifying” language that Pence promised to put in Indiana’s bill, out of the Arkansas bill:

While there were several attempts up until the last minute to add a clause to the bill that would explicitly bar discrimination of gays and lesbians, a measure that Gov. Mike Pence of Indiana pledged to add in a news conference on on Tuesday, the sponsors of the bill in the General Assembly rejected such moves.

”If you start shaving out exemptions in laws, next thing you know, you’ll gut the law because everyone will want an exemption,” said State Senator Bart Hester, a Republican and one if the bill’s lead supporters.

The Times notes that Hutchinson had earlier expressed reservations about signing an earlier version of the bill, but said he might sign this one if it “reaches my desk in similar form as to what has been passed in 20 other states.”

So far, businesses such as Gap, Levi Strauss, Walmart, Apple, and Yelp have expressed disapproval of the bill. Apple CEO Tim Cook, a native Arkansan, calling the potential law “dangerous.”