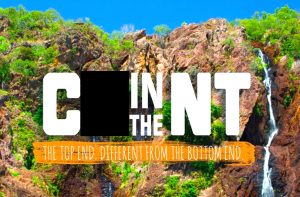 Earlier this year, a mysterious tourism campaign popped up online. It encouraged tourists to visit Australia’s Northern Territory. While its message, “See you in the NT” sounds innocent enough to the ear, they’ve taken some creative licensing with the spelling of the words and its campaign images and merchandise are very much not. Its slogan also is “The top end. Different from the bottom end.”

Reactions were mixed when the campaign first appeared. Some social media users called it an “embarrassment.” Others called it “clever,” and decided they were going to make travel plans based on it.

On CU in the NT’s social media accounts, they post beautiful pictures of the Northern Territory.

Enjoy the ragged coastline and picturesque sunsets along Nightcliff in Darwin, Northern Territory. Don’t forget to check out the Nightcliff Sunday markets 6am-2pm. Whether Darwin is the start or the end of your NT adventure, we know you’ll enjoy your time here. Tell your family & friends, CU in the NT! #cuinthent #travelgoals #northernterritory #darwin #australia

And photos of their merch, strategically laid out.

We’ve added a few coolers to the site. Jump in and grab them quickly as they wont last long! www.ntofficial.com #cuinthent

Now, the Advertising Standards Bureau in Australia has ruled the campaign obscene, a ruling the official tourism bureau in the area welcomes, according to ABC Darwin. “The advertisement had been clearly designed to highlight letters to form a strong reference to the word ‘c***,'” they said. “The board noted community standards research into language had shown that the community considered the ‘C-word’ to be obscene and not appropriate in advertising in any form.”

As of now, the campaign’s social media accounts are still active.