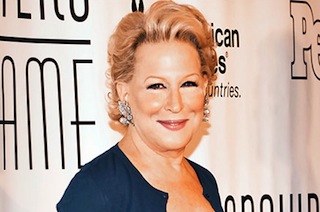 President Barack Obama said Friday that his choice for the next Federal Reserve Chairman—widely presumed to be narrowed down to Lawrence “Larry to his extremely powerful friends” Summers and Janet Yellen—is one of the most important of his presidency.

And at least one non-econ wonk is taking it seriously. Bette Midler weighed in on the decision very early Monday morning (or late Sunday night, depending on when your Breaking Bad viewing party ended), denouncing candidate Summers’s role in the 2007-8 financial collapse:

HUH. The architect of bank deregulation, which turned straitlaced banks into casinos and bankers into pimps, may be next Head Fed: Summers.

Larry Summers, Mr. De-Regulation, has never stepped forward to say…"Oops! My bad!" Five years of a world wide recession, and not a peep.

Larry Summers, a HUGE ADVOCATE of higher exec pay and bonuses for execs whose firms received billions in federal bailouts during the crisis.

Of course, Alan Greenspan, an acolyte of demented, delusional, adulterous Ayn Rand, never apologized or never admitted his failures, either.

Some have already tweeted the obvious snarky reply that Midler’s opinion certainly settles the matter. But given that the primary objection to Janet Yellen’s appointment is “SHE’S A WOMAN!!!@!@!!1@!,” Midler’s POV is not unwelcome.

This also represents a significant expansion of Midler’s political activism, which was previously more environmentally-based: