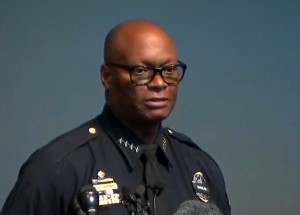 Less than two months after the horrific shooting of police officers, the chief of the Dallas police department has announced his retirement.

Chief David Brown received plaudits for his leadership in the wake of the shooting. He said that too much is being asked of police officers and he encouraged people who have problems with policing in their communities to join the police and help fix the system from within.

You can watch his moving speech from the Dallas memorial here:

Brown announced his retirement in the following statement:

After much prayer, I am announcing my retirement from the Dallas Police Department after 33 years as a Dallas police officer. My retirement will be effective October 22, 2016.

Serving the citizens of Dallas in this noble profession has been both a true honor and a humbling experience.

Thank you to Mayors, City Managers and Dallas City Council members past and present for allowing me to serve. Thank you for the service you have provided for this great city.

I became a Dallas cop in 1983 because of the crack cocaine epidemic’s impact on my neighborhood in Oak Cliff. I wanted to be part of the solution. Since that time I have taken great pride in knowing that we have always been part of the solution and helped to make Dallas the world class city it is today.

Let’s always remember the fallen officers including the five officers on July 7, 2016, and the brave men and women of the Dallas Police Department for their sacrifices to keep Dallas safe. Their memory will remain with all of us forever. I know the people of Dallas will never forget the ultimate sacrifice they made on the streets of our city that awful night.

Officers, your extraordinary service will forever be etched in my heart and will serve as a guidepost for me in the next phase of my life. You will always be in my prayers.

I want to thank my family for their love and support.

This is a difficult decision. I pray for your understanding and well wishes.

Finally, I want to acknowledge my Lord and Savior Jesus Christ for my life, health, and strength. I pray for His continued blessings over my life.

Thank you Dallas and God bless!!