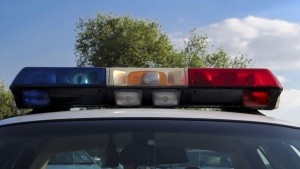 Online and television outlets are reporting a possible active shooter situation at Building 26 of the Naval Medical Center San Diego. The facility’s Facebook page posted the following chilling notice at 8:10 am:

“**!ATTENTION!** An active shooter has just been been reported in building #26 at Naval Medical Center San Diego. All occupants are advised to run, hide or fight. All non-emergency response personnel are asked to stay away from the compound, located at 34800 Bob Wilson Drive, San Diego, CA 92134.”

The building in question is the fitness center. Here’s a picture of the scene outside the fcility’s gate minites ago:

According to local news, the facility unveiled a new training center just yesterday:

Very little is known at this time, but you can watch a live feed of the coverage above, and we will update this story as it unfolds.

UPDATE – 11:54 A.M. EST SWAT officers have arrived on the scene and are working to engage the situation:

San Diego Fire confirms that military police are handling report of an active shooter situation on Navy base https://t.co/uLcfg3xGy3

UPDATE – 12:07 P.M. EST CNN confirmed reports that civilians are being asked to retreat from the area around the building, and all nearby businesses have suspended their activities.

UPDATE – 12:15 P.M. EST BNO News reported that the shooter did not aim at people, but fired several shots into the air. The report also says that police are currently working to confirm, and no one has been taken into custody yet. ABC’s Gio Beitez reported a similar development.

NEW: Navy official says someone claimed to have heard gunshots near Building 26 at Naval Med Center San Diego. So far no injuries reported.

UPDATE – 12:40 P.M. EST Schools around the area have reportedly started to lift their lockdowns:

UPDATE – 12:49 P.M. EST The medical center has released a statement on the situation:

UPDATE – 1:46 P.M. EST A Navy spokesman recently told the media that examinations are still ongoing throughout the building, but there are currently no indications that any shots were actually fired: