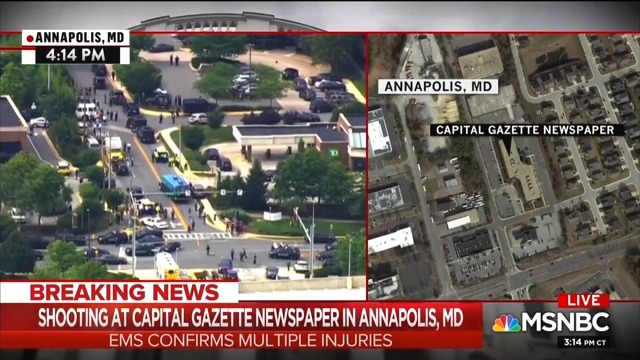 In a series of tweets Thursday, Capital Gazette reporter Phil Davis described the horror of the fatal mass shooting that played out within the newspaper’s Annapolis, MD building.

Authorities said multiple people were killed in the shooting at the newsroom, and a suspect was apprehended.

“Gunman shot through the glass door to the office and opened fire on multiple employees,” Davis wrote, adding, “it’s bad.”

A single shooter shot multiple people at my office, some of whom are dead.

Gunman shot through the glass door to the office and opened fire on multiple employees. Can’t say much more and don’t want to declare anyone dead, but it’s bad.

“There is nothing more terrifying than hearing multiple people get shot while you’re under your desk and then hear the gunman reload,” he added in another tweet.

According to one of the newsroom intern’s, Anthony Messenger, The Baltimore Sun‘s John Macnamara was shot.

Another tweet reports that sports writer Bill Wagner wasn’t at the building during the shooting, but several of his co-workers were harmed.

Navy football beat writer Bill Wagner confirms he wasn’t at the Capital Gazette this afternoon when the shooting occurred and is fine. He writes: “However, several of my close colleagues are not. Please pray for all of those employees at The Capital who were shot.”

Two other employees tweeted that they were safe; however, employee Rachael Pacella is said to have been hospitalized.

I am safe. Was not there. On my way to scene.

I am OK. I am on vacation in the Outer Banks. I will try to post as I get more information. Please, just pray.

I don’t have many details right now. My colleagues Phil Davis, Chase Cook, Anthony Messenger, Rick Hutzell and Selene San Felice are ok. Rachael Pacella is in the hospital with an injury.

Maryland Governor Larry Hogan said he was “absolutely devastated to learn of this tragedy,” telling the public to “heed all warnings and stay away from the area.”

Absolutely devastated to learn of this tragedy in Annapolis. I am in contact with County Executive Steve Schuh, and @MDSP is on the scene assisting @AACOPD. Please, heed all warnings and stay away from the area. Praying for those at the scene and for our community. https://t.co/bI6PdUjHfh