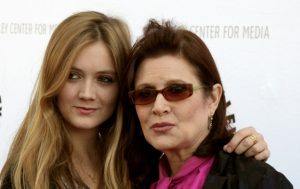 You already know that the late Carrie Fisher was the daughter of the late Debbie Reynolds and that both were Hollywood icons, but did you know that there is a third-generation actress in the mix?

Too bad neither Fisher nor Reynolds ever wanted Lourd to pursue acting, she revealed in an interview last year. Luckily for them, she got a degree from NYU in 2014, but unluckily for them, she secretly auditioned for Star Wars: The Force Awakens, too. She landed the part of Lieutenant Connix and was always careful to point out her character had nothing to do with the iconic role her mother played in the franchise.

In a different interview this year, she said this:

The one thing they’d all say my whole life was: “The last thing you want to be is an actress.” They wanted me to be a doctor, a C.E.O., a trashman. Basically anything but an actress.

Now, she is starring in Billionaire Boys Club, a film set for a 2017 release. The movie also stars Ansel Elgort, Kevin Spacey, and her Scream Queens co-star Emma Roberts.

She’s doing well for herself, certainly. Still, Reynolds used to make her granddaughter read her old journal entries from her days as a starlet:

It’s a binder of loose-leaf papers written in the second person: “Dear Debbie, you’re sitting in the makeup chair, you have no eyebrows, you’re a shell of yourself, and it’s 5 am. How did you get here?“ Her advice would be to keep true to yourself and don’t lose yourself. Or your eyebrows.