Charlie Rangel’s Epic Rant: “If I Was You I May Want Me To Go Away Too” 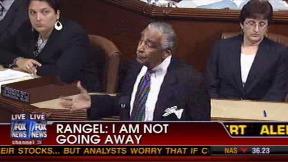 The term “political theater” gets thrown around a lot, but that was exactly what happened on the House floor today. In a moment so unexpected the cable news networks seemed caught off guard (until they all went wall-to-wall), Rep. Charlie Rangel spoke for more than 20 minutes about his pending ethics trial.

It was a rant that slammed everyone from House Democrats to Pres. Barack Obama – and he promised not to go away anytime soon. Watch this video.

This was a very senior member of Congress, who clearly thinks he’s been wronged by both the press and his colleagues, sounding off about exactly the way he feels. And he’s pissed off. Here’s a selection of some of the best quotes:

• “The President wants dignity, let’s have dignity in this house, where the ethics committee means something. And that none of you, if the newspapers say anything, will have to wait two years before you can say ‘no comment.'”

• “If I can’t get my dignity back here, then fire your best shot in getting rid of me through expulsion.”

And to tie this to yesterday’s crazy story of the day, Chuck Todd wondered on MSNBC if Rangel “found inspiration in that JetBlue flight attendant or something.”