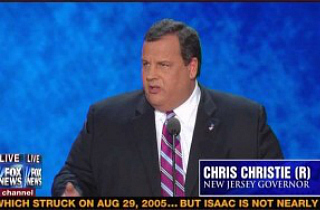 According to a new book about last year’s presidential election, Gov. Chris Christie (R-NJ) threatened to drop the infamous “f-bomb” on live television during the 2012 Republican National Convention.

The revelation comes as part of a conversation with the governor included in Washington Post campaign correspondent Dan Balz‘s new book Collision 2012. CBS News reports that the book, which hits shelves on August 6th, contains new insight on the strong GOP pressure for Christie to join the party’s primary race in 2011 as well as the drama that went down when a video almost didn’t run before the governor’s RNC speech.

According to Balz’s conversations with Christie, former President George W. Bush and former Secretary of State Henry Kissinger were among the many powerful Republicans who contacted the New Jersey governor and requested that he throw his hat into the primary ring during the summer of 2011. Former first ladies Nancy Reagan and Barbara Bush also reportedly pressured the governor, to no avail.

Balz also reveals that Christie’s potential as a VP candidate for the Romney ticket fell through when he declined to resign his governorship to avoid a Securities and Exchange Commission regulation that would have prevented the ticket from accepting donations from big banks located in the state of a candidate.

But one of the more salacious details about Christie’s involvement in the 2012 election season involves tense moments from shortly before his keynote address at the 2012 GOP convention. CBS reports:

[W]hen organizers told Christie that they were scrapping a three-minute introduction video before his speech due to time constraints, the governor insisted they reconsider. When they pushed back, according to Balz, Christie told a member of the production team “to ask the director if he had ever heard anyone say ‘f***’ on live television, because that’s what he was about to do if the video didn’t run.”

After another sharp exchange, Christie said he wouldn’t deliver the speech if the video didn’t run. Romney’s convention team leader, Russ Schriefer, intervened, instructing the director to play the video.

For old time’s sake, watch the beginning of Christie’s convention speech below, via Fox: