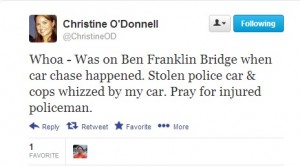 A high-speed chase that began in Camden, New Jersey this morning ended in North Philadelphia, but along the way, the action passed by a rather famous witness. Two suspects, a man and a woman, stole a Camden Police cruiser, and led cops on a chase across the border into Philadelphia, where the man was taken into custody, but the woman stole a second police car. Witnessing part of the action was former U.S. Senate candidate Christine O’Donnell, who later tweeted “Whoa – Was on Ben Franklin Bridge when car chase happened. Stolen police car & cops whizzed by my car. Pray for injured policeman.”

From The Courier-Post Online:

The suspects — a man and a woman — wrecked the stolen Camden police cruiser around 10:05 a.m. at 7th and Norris streets in Philadelphia. The male suspect was taken into custody but somehow during the chaos the woman took off with a Philadelphia Police cruiser and a second police pursuit began.

“They go to apprehend her, a struggle ensues and she’s able to break loose, as I understand it,” said Philadelphia Police Deputy Commissioner Richard Ross. “She then gets in one of our vehicles and that’s when the pursuit starts.”

O’Donnell’s tweet is a sign of the times, and while she deserves tremendous credit for not tweeting while driving, it would have been a much better story if she’d live-tweeted the incident.

Here’s video of local ABC station WPVI’s coverage of the chase this morning: