CNN’s Angela Rye to Trump Supporter: You Have a ‘Horrible Record at Defending People of Color’ 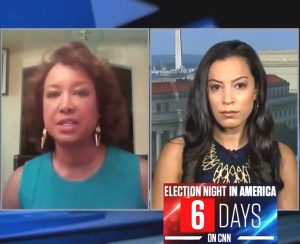 Carroll, a Trump supporter, cited what she described as Clinton’s “past record of 20, 30 years of not really supporting African Americans and their issues,” as a reason for the dropoff in turnout among black voters. Among those issues, she listed school choice, incarceration, and jobs. Carroll wrote in an op-ed in August, “Mr. Trump is the first Republican presidential candidate in my lifetime to be unabashedly unafraid to talk about the problems facing the black community.”

Rye argued that “the right to life” was the paramount issue, and that, on this front, both Carroll and Trump had been remiss.

“Lieutenant Governor, with all due respect, I’m just trying to figure out where this black support that you’re talking about was when ‘Stand Your Ground’ was taking black people out,” Rye said, referring to the controversial Florida law that gives people who feel they are threatened wider latitude to use deadly force. “Where were you for Marissa Alexander? Where were you for Trayvon Martin?”

Rye, former executive director and general counsel to the Congressional Black Caucus, continued: “It is so interesting to me that now all of a sudden you are a black militant, former Lieutenant Governor, and you have a horrible record at defending people of color. I am interested to see something different from you besides this lip service that you are giving us right now.”