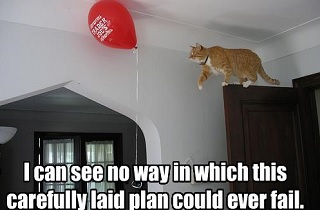 Like a narc walking around a frat party asking “fellow young people, where can I obtain an enjoyable reefer cigarette, because my reefer pusher is not answering his pager,” The Heritage Foundation has dressed down its anti-Obamacare propaganda into a Buzzfeed Community post featuring a series of gifs that explain “That One Time I Was Really, Really Excited About Obamacare,” I guess until they figured out it would cover generations of low-IQ Hispanics.

This isn’t the first time Republicans have tried to put some Buzzfeed lipstick on the pig of their ancient white ideas. In April, the National Republican Congressional Committee rolled out a new Buzzfeed-y website that ripped off Buzzfeed’s look and vibe, but now makes only the occasional stab at mimicking the listicles and meme-mongering of its muse.

The Heritage Foundation seems to be taking a stab at the real thing, which made someone at Wonkette a little suspicious:

Today, Buzzfeed won the Internet by letting the Heritage Foundation post a bunch of dumb fucking lie-gifs about Obamacare, which were total lies and not even true? That’s cool, Buzzfeed, we know you got that $100 billion investment to pay back, so whatever it takes, dudes. I mean, we hope they gave them money? It doesn’t say “sponsored content” on it, it just says “Buzzfeed Community”? We could probly text or tweet at them, but that sounds suspiciously like  work.

It appears, however, that The Heritage Foundation’s post is just another community post, which means that Buzzfeed only made money on it to the extent that Wonkette and I clicked on the damn thing to make fun of it. The post did rack up over 30,000 views, which sounds impressive, but is less than half of what “20 People Who Know Exactly How You Feel On Monday” collected. However much money Buzzfeed makes on 30,000 hits, we (me and, I’m sure, Wonkette) think Buzzfeed should donate an equal amount to the National Association of Free & Charitable Clinics.

Aside from peddling the lies and distortions that Wonkette references, The Heritage Foundation’s post contains a glaring omission, given its title. They forget to mention That Other Time I Was Really, Really Excited About Obamacare,” which was when they invented it, and presumably when Senator Barack Obama ran against it.