Eric Trump Says Obama Hasn’t Been Back To Chicago ‘Once,’ But That’s Not Exactly the Case
Video

Eric Trump Says Obama Hasn’t Been Back To Chicago ‘Once,’ But That’s Not Exactly the Case 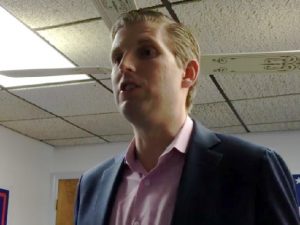 In an interview with the Daytona Beach News-Journal, Donald Trump’s son Eric stated that President Barack Obama hasn’t been back to his hometown of Chicago “once” despite all of the violence that has occurred in the city.

Eric Trump discussed this with the paper as he was asked how his father would be able to fare better with African-American voters than previous Republican candidates. According to Eric, Democrats continue to take for granted the black vote, all while the inner cities are “left behind.”

Stating that 60% of young African-Americans are unemployed — which is false — he then pivoted to Chicago, claiming POTUS hasn’t “been home once” despite there being 3,000 shootings there this year.

Eric Trump *again* says in local interview Obama has not been back to Chicago once. Just a total lie. Was there three weeks ago.

And, lo and behold, Obama made a very public trip to Chicago last month. He attended a fundraiser for Democratic Senate candidate Tammy Duckworth, where he commented about the then just-released Access Hollywood tape. The New York Times reported that Obama spent two nights at his South Side home that weekend.

Eric Trump was in Florida yesterday campaigning for his father as we hit the stretch run of the election. Currently, Real Clear Politics shows the race in the state as a dead heat, with Trump up 0.7 points over Hillary Clinton.

Watch the clip above, via Daytona Beach News-Journal.