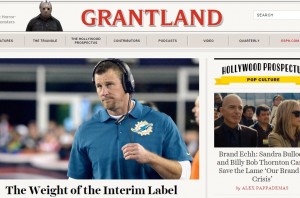 ESPN has announced that they are ceasing publication of Grantland, the sports and pop culture blog run by sports writer Bill Simmons until he and the network parted ways back in May.

“Effective immediately we are suspending the publication of Grantland,” ESPN announced. “After careful consideration, we have decided to direct our time and energy going forward to projects that we believe will have a broader and more significant impact across our enterprise.”

“Grantland distinguished itself with quality writing, smart ideas, original thinking and fun,” they continued. “We are grateful to those who made it so. Bill Simmons was passionately committed to the site and proved to be an outstanding editor with a real eye for talent.”

“Thanks to all the other writers, editors and staff who worked very hard to create content with an identifiable sensibility and consistent intelligence and quality. We also extend our thanks to Chris Connelly who stepped in to help us maintain the site these past five months as he returns to his prior role.”

Details are sparse, but CNN’s Brian Stelter reports that not all of Grantland’s 40 employees will remain with the network.

About 40 people @ESPN are affected by the “suspension” of Grantland. Some will stay with the company, some won’t…

UPDATE (2:46 PM ET): Bill Simmons took to Twitter to bid farewell to his creation, and trash ESPN for their treatment of Grantland employees.

I loved everyone I worked with at G and loved what we built. Watching good/kind/talented people get treated so callously = simply appalling.