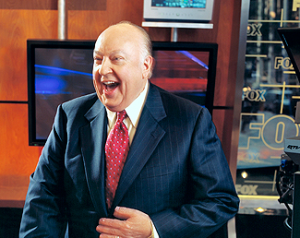 In an unusual–and revealing–interview with Esquire, Fox News chief Roger Ailes reveals why he no longer carries a Blackberry, how he was beaten up as a kid, and why he thinks MSNBC’s multi-million dollar promo campaign, “Lean Forward,” was a monumental waste of money. “Lean? They paid Spike Lee $3 million for ‘Lean’? What kind of word is that? Isn’t that their problem — that they’re leaning? Didn’t anybody say, What about ‘move’?”

We all know Ailes is a blunt and colorful speaker. But here, well, he’s quite amazing.

This profile is a graduate program in Roger Ailes, and a highly entertaining one at that. Take, for instance, this riff on his old boss, Richard Nixon:

“If Richard Nixon was alive today, he’d be on the couch with Oprah, talking about how he was poor, his brother died, his mother didn’t love him, and his father beat the shit out of him. And everybody would say, Oh, poor guy, he’s doing the best he can. See, every human being has stuff — stuff they have to carry around, stuff they have to deal with. And Richard Nixon had a lot of stuff. He did the best he could with it, but it got him in the end. Still, he did a lot of good things as president.”

Esquire got extended access to Ailes, who was apparently impressed by writer Tom Junod‘s shoe-leather approach, reaching out to dozens of Ailes’ friends, associates and former colleagues. The rapport led to some very unusual moments, like this comment from Ailes, which sprung up during a discussion of President Obama, people’s “stuff,” and the formative experiences that define people. Ailes turned to Junod’s own daughter:

“Yes, but your daughter loves you. And this is how you’ll know: One day, something will scare her. She’ll be scared, terrified, and she’ll look to you for protection. And that’s how you’ll know she loves you.”

Not the kind of thing you’d necessarily expect to hear from Ailes, who had his own ideas of how the interview would go from the outset, telling Junod:

“I know what you’re going to write about me,” Roger Ailes says. “I can pretty much pick the words for you. Paranoid, right-wing, fat. I love that. I’m the only guy in America who’s fat.”