A group of protesters marched through several rural Missouri towns on Thursday and, as you might expect, they were met with support paired with some racist trolling: Confederate flags, Ku Klux Klan imagery, fried chicken and melon placed in the street.

Several dozen residents of the two towns, Gerald and Rosebud, showed up to counter-protest the peaceful marchers who were demonstrating against the grand jury decision not to indict Ferguson police officer Darren Wilson for the shooting death of 18-year-old Michael Brown.

It should be noted that some counter-protesters politely showed support for Wilson and the grand jury, but regardless of your thoughts on the Ferguson decision, one can’t help but cringe at some of the more troubling displays. For instance, below is a group of men who thought it wise to fly a Confederate flag, don a makeshift Klan hood, and bring a baby along for the ride: 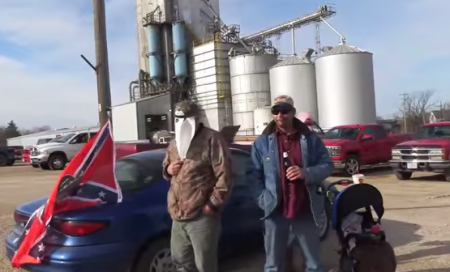 Another counter-protester made the brave decision to copy and paste his crazy uncle’s chain email about black people onto that piece of paper. Bonus points for the shit-eating grin: 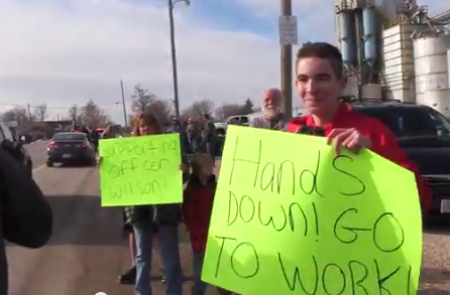 And then there was the display of fried chicken, melon, and a 40-ounce beverage left by some clever individuals: 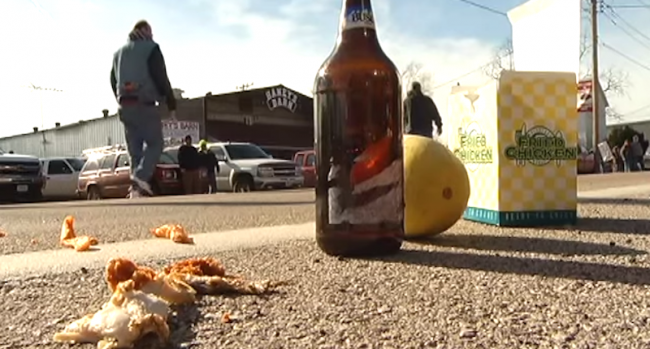 As for the reported gunshot, according to Raw Story, “Police are investigating a gunshot fired at the back of one of the buses traveling with the marchers.”

Of course, there were some positive interactions worth noting. For example, former state legislator Charlie Schlottach greeted the protesters from his tractor, explaining how while he supports the police and the grand jury’s decision, he believes our nation needs to have tough conversations about race and come together to look at our “shortcomings.”