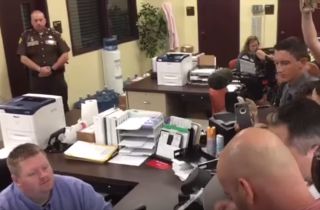 Kentuckians James Yates and William Smith became the first gay couple on Friday morning to be issued a marriage license in Rowan County since the Supreme Court legalized same-sex marriage three months ago in the Obergefell v. Hodges case.

Same-sex couples were denied marriage licenses by Kim Davis, the county’s clerk, since the high court’s ruling in June. Davis was found in contempt of court on Thursday and sent to jail, where she will remain unless she complies with the law.

Davis, an elected official who filed a since-rejected injunction request seeking an exemption to the Supreme Court’s ruling, cites her religious beliefs in refusing to issue marriage licenses to same-sex couples. She has received support from Republican presidential candidates Mike Huckabee and Ted Cruz, and has drawn the ire of gay rights activist Dan Savage and White House Press Secretary Josh Earnest.

Davis’ attorney, Mathew Staver, said Friday morning that Davis is prepared to stay behind bars as long as is required to defend her beliefs. Staver and Davis’ husband, Joe Davis, have said she has no plans to resign.

Yates and Smith might not have succeeded after all, though, as one of Davis’ lawyers said at a press conference Friday afternoon that all same-sex marriage licenses issued on Friday are void.

Watch the video below, via the Lexington Herald Leader: