For Female TV Presenters, Is Being Attractive Part Of The Job? 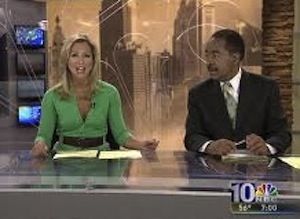 Yesterday, Smudged Newsprint’s “Media Nation” column, written by Dan Kennedy, an assistant professor Northeastern University’s School of Journalism, took on The New Haven Register for the Connecticut paper’s decision to run an online poll on the “hottest” female television personality. (We’d link you to it, but, as of this morning, the URL for the poll merely brings up a 404 error page.)

Kennedy called the poll a “disgrace” and quoted an online commenter who felt the female anchors included in the poll “should be insulted.”

Now, polls such as this are nothing new – in fact, they’ve almost become a cliché for online news and entertainment sources, as they’re an incredibly easy way to rack up views and drum up reader participation. Plus, polls are fun. Google searches for “hottest female reporter” and “hottest female TV personality” brings up polls and slideshows from a variety of sources (the image we used for this post, for instance, comes from a “Hot Fun in the Summertime” series of polls on AllThingsCNN.com) – and, not too surprisingly, may of the polls are concerned specifically with female sports reporters. Laaadies!

We see Kennedy’s point, of course: Polls focusing on TV personalities’ looks, while arguably fun, feel cheap and seem like an easy ploy to lure in site visitors. There’s the added element that people don’t have a say or a role in how they look the same way they can control how hard they work or how much they practice to refine their craft, so it’s unfair to judge them based on something more or less beyond their control.

Then there’s the reality that, when the polls focus on the attractiveness of female reporters and personalities, people worry that it’s a commentary on their worth, and that looks are either a main or the main factor in their career success, and not their work ethic or talent.

But… what if it is a main factor?

Let’s play devil’s advocate here for a moment: If a person’s career is dependent on his or her ability to connect with viewers, it stands to reason that he or she would benefit, greatly, from being attractive, or pleasant to look at, or giving the appearance of having knowledge and authority as dictated by a particular culture (i.e. Older = wiser). “Hotness” is completely relative, of course, but it makes sense that a person who needs to be able to connect with an audience visually would be conventionally attractive in order to capture the eye of viewers as they click through come 200+ channels. I mean, who cares if dudes actually end up listening to the news as long as they’re tuning in, right?

Then, of course, there’s the matter of whether there’s a difference between being a TV reporter and a so-called “presenter,” whose job is to present the news and not necessarily provide analysis or commentary. In the case of TV presenters, looks are an integral part of the package.

So. Should female presenters be insulted by their inclusion in a polling rating their relative “hotness”? I would suspect they realize that their looks are not only beneficial to their careers, but also a major part of their visibility and success. That doesn’t mean such polls aren’t cheap or tacky or unnecessary or misogynistic, depending on how you look at them, it just means that, perhaps, judging or rating TV personalities for their looks isn’t inherently insulting and doesn’t come completely out of left field. And, you know. As long as people keep participating in these polls, they’ll be here to stay.

Now back to your regularly scheduled routine of Googling Megyn Kelly GQ photos.