For First Time in Years, More People Like George W. Bush than Dislike Him

For First Time in Years, More People Like George W. Bush than Dislike Him 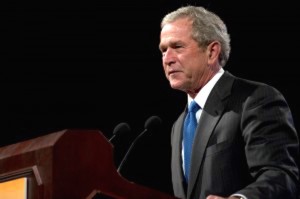 A CNN/ORD poll discovered that for the first time since leaving office, 52% of adults had a “favorable” impression of Bush the Younger, overtaking the 43% who didn’t. For comparison: when he left office in 2008, roughly a third of Americans had a favorable impression of him. (Staying quiet and painting quasi-Hockney-esque portraits apparently makes one popular.)

In contrast, Obama currently has a 45% approval rating and a 52% disapproval rating, which is befitting for a lame duck president slogging through the last year-and-a-half of his administration.

According to CNN, the percentage of Americans who dislike him come from the demographic that already disliked him during his administration, but gained significant ground in other groups:

As of a year ago, 46% had a favorable take on the former president, 51% an unfavorable one. Since then, Bush has gained in esteem among men (up 11 points), Republicans (up 10 points), those with household incomes under $50,000 (up 10 points), younger adults (up 9 points among those under age 50) and suburbanites (up 8 points).

CNN attributes this to the naturally-occurring Warm and Fuzzies Americans often feel about former presidents, which increases the longer they’ve been out of office. (See: Jimmy Carter.)