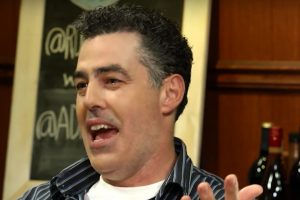 Nothing draws more ire on conservative-leaning afternoon shows than the idea of “safe spaces.” Safe spaces are just what they sound like, by the way. They’re places people can go and chill out without the worry of facing racism, homophobia, sexism, etc. College campuses are full of them now and some people do not like it. Of course, for every person demanding that college kids “grow up” and “live in the real world,” there is someone who says that having a place to decompress is really not that bad for society; in fact, it just might be good to give people the option to go express themselves or calm down in a judgement-free area.

On the hunt to find out which side is right is comic Adam Corolla, who is making a documentary about the phenomenon, according to The Hollywood Reporter. Well. Maybe not. His film, which he will host with Dennis Prager, is straight-up called No Safe Spaces. They’re touring universities across the country to answer their questions, which include, “When did everyone become such a colossal pussy?” according to Corolla.

“Having your beliefs challenged is as American as apple pie,” he said. Prager backed him up with similar sentiments like this:

Universities have become a laughingstock. When prestigious institutions of rigorous academic instruction give out coloring books and Play-Doh to 20-year-old students in designated safe-space areas on campus, we are failing them.

They are seeking a theatrical release for the movie, which will also explore why conservative commentators get their invitations to speak at universities rescinded or are so often protested. There is no theatrical deal in place yet.