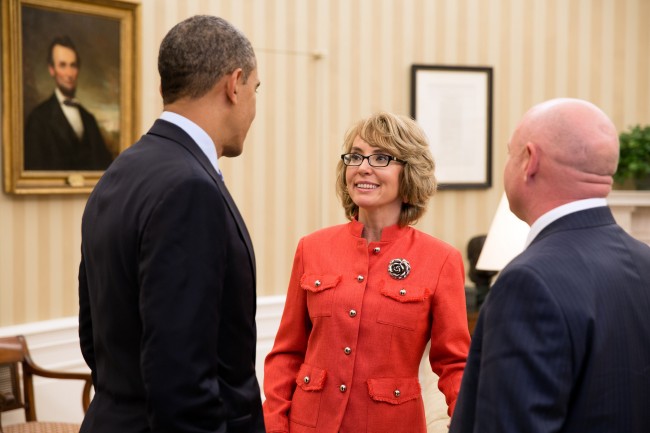 On the third anniversary of the Sandy Hook massacre, former Arizona Rep. Gabrielle Giffords argued that Americans should embrace “optimism” instead of fear while slamming Congress and the US gun lobby for encouraging “the shameful status quo we’ve grown to expect.”

In an op-ed for USA Today, Giffords, who was critically wounded by a gunshot wound to the head during a 2011 assassination attempt, lamented the 2012 attack in Newtown, CT. On that December day three years ago, a lone gunman opened fired at an elementary school, killing 20 children and 6 adults. Giffords also deplored political inaction since the massacre, writing:

“I know that this week, Congress will do exactly what its members have done every week since those 20 kindergartners and first-graders were murdered in their classrooms: nothing at all.

That’s cowardice, an embrace of the shameful status quo we’ve grown to expect from a Congress in the gun lobby’s grip. Many of my former colleagues are in the cold clutches of pessimism and its key ingredient: fear.”

Contrasting the “pessimism” of her former colleagues, Giffords wrote the “slain children were, as kids everywhere are, fundamentally optimistic. Every day at school, they were eager to learn new things. Every day at home, their bonds with their families and their traditions grew deeper.”

She also implored Congress and President Barack Obama to take action on gun reform, reminding Americans of their roles in standing up to the gun lobby. “The only things standing between us and that vital goal are Congress and the gun lobby,” Giffords wrote. “And it is just a matter of time until Congress comes around — and acts.”

“So let’s carry our elected officials in Washington along with us, buoyed by our grit and our hope and our optimism, just as Americans always have,” she concluded.