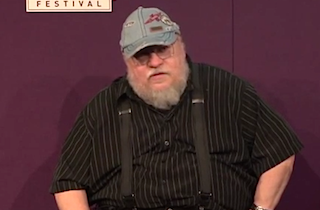 The issue of sex and nudity in the Games of Thrones book series and HBO drama has been plaguing author George R.R. Martin for some time now. At last month’s San Diego Comic-Con, Martin told a reporter that despite what the creators of South Park may think, he’s not actually obsessed with “wieners.” When the topic came up again at this week’s Edinburgh International Book Festival, Martin admitted, “Generally, I’m in favor of sex.”

“When you see something, it has a more powerful, visceral effect upon you,” Martin said of the difference between his books and the television show. He said he can set a scene in a brothel filled with scantily-clad women and the reader may not think much of it, but when that same scene appears on screen people suddenly think “there’s a lot more sex” in the show. “But I don’t think there actually is a lot more sex,” he said.

“Generally, I’m in favor of sex,” Martin joked. “And I think a large portion of the audience is too.”

During the question and answer session with fans, Martin also said that the show’s writers have “caught up” with where he is in the books, saying “there’s no doubt that the show is moving very, very fast.” He said all he can do is “write one word at a time, once sentence at a time, one book at a time.”

In July, Martin responded to people who are worried that he may die before he gets a chance to finish the wildly popular Game of Thrones story by saying, “I find that question pretty offensive, people speculating about my death and my health. So fuck you to those people.”